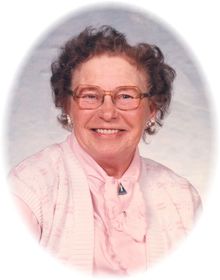 Life History for Gloria Maus
Gloria Maus, age 87, lifetime resident of Osakis passed into a new life with her family close by on Monday, February 4, 2013 at her home in rural Osakis, MN.
Gloria Mildred Brouns was the youngest daughter born to Louis and Helena (Mechels) Brouns. She was born on January 18, 1926 in Osakis, MN and grew up on the family farm. Gloria graduated as valedictorian of the Osakis High School Class of 1944. She remained home helping on the farm following graduation. On October 9, 1945 Gloria married her sweetheart, Harold Maus. They both came from farm families and soon they were actively engaged in their own farming operation complete with dairy cows, sheep, pigs, poultry, horses, ponies, cats and dogs. Gloria learned to share the rest of the families' love of ponies and wouldn't miss a parade. Gloria also raised rat terriers and enjoyed many loyal dog companions over the years.
Gloria was an accomplished farm wife who enjoyed working outdoors, in the barn or at the kitchen stove cooking or canning the seasons produce. She also liked to work on various craft projects throughout the winter months and enjoyed going to dances, getting together with the neighbors or relatives for a game of cards or socializing. She was a loving, devoted wife, mother and grandma who will be dearly missed by her family and many friends.
She is survived by her husband of 67 years, Harold Maus of Osakis; 5 children, Nancy (Wayne) Johanson of Osakis, Richard (Linda) Maus of Gallatin Gateway, MT, Betty (Gary) Grinstead and Donald (Candace) Maus, all of Osakis, Donna (Ross) Abel of Ham Lake, MN; 11 grandchildren, Jeremy (Heidi) Maus, Carissa (Eric) Paulson, Jodi (John) Price, Matthew (Jamie) Maus, Mark (Carmen) Grinstead, Michelle (Jay) Stewart, Teresa (Chad) Wieneke, Tammy Maus, Scott (Crystal) Maus, Lisa (Jeremy) Heier and Brenda Abel; 18 great grandchildren; many nieces and nephews.
Preceding Gloria in death are her parents, a grandson, Kelly Maus, her brothers, Joseph, Kenneth and an infant brother, Albert Brouns; sisters, Rosie Schneiderhan, Marie Collins and two infant sisters, Lenora and Louisa.
A Mass of Resurrection will be Saturday, February 9 at 11:00 am at the Immaculate Conception Catholic Church in Osakis with Fr. Dave Petron officiating. Music is by the church choirs. Interment is at the Calvary Cemetery in Osakis with pallbearers and honorary pallbearers being her grandchildren and their spouses.
Arrangements by the Roy-Hetland Funeral Home in Osakis, MN.

To order memorial trees or send flowers to the family in memory of Gloria Maus, please visit our flower store.