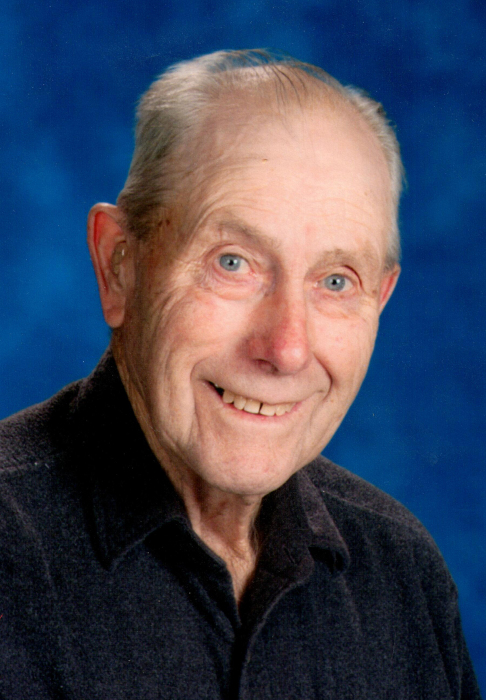 Harlan Wilmer Tenhoff entered his heavenly home Saturday, March 5, 2022, at Alomere Health in Alexandria, with beloved grandchildren at his side. Harlan was born March 18, 1924, in Osakis, MN at the family farm, to Amanda and Ed Tenhoff. He attended Country School District 12 and 22, attending through the 8th grade. He then continued to work with his family on their farm through his growing up years.

In 1947, Harlan had the good fortune to meet a tall, dark-haired beauty at a neighborhood gathering. Her name was Marie Knoblach and they were married January 6, 1948. To this union were born James, Donald, Mary, Linda, and Kathleen.

Harlan worked for a time for his brother-in-law, Leo, on his farm. In September 1950, Harlan began work at the Osakis Creamery, driving milk truck. It was not an easy job, hoisting heavy milk cans up into the truck. His kids would accompany him occasionally and can attest to the fact that Harlan literally “whistled while he worked” all day long! After his route was done for the day, Harlan began to pick up painting jobs. In the course of his life, he has painted innumerable structures of every size and shape. Harlan worked for the Creamery until 1967, at which time he began working as a custodian at the Osakis Public School. He retired after 22 years in 1989. After retirement, he continued painting and doing handy-man jobs for many years.

The “job” he enjoyed the very most was volunteering at St. Agnes School in Osakis, which he did daily for 29 years. Harlan was very mechanically savvy and there seemed to be nothing he could not fix. He was fond of asking his grown children, “you HIRED that done??” He loved a challenge.

Harlan and Marie were able to enjoy some travel, although Marie needed a bit of convincing. Their first airplane ride was a 1970 trip to California. They also traveled to Washington several times.

Harlan became a Knight of Columbus in 1949 and remained a Knight until his death.

He was never one to “sit around.” Always busy, Harlan and Marie cleaned the sanctuary and sacristy every week for countless years. If there was any job that needed to be done, Harlan was more than willing to do it.

Harlan was a man with a truly joyful spirit. He was a gracious man; he had a way of making others feel comfortable and important. He enjoyed visiting and looked forward to daily morning coffee with a great group of friends for years.

Harlan was blessed with a large family, and he looked forward to their gatherings and all the happy chaos that ensued. He was proud of each one.

He was rarely seen without a smile. As a granddaughter wrote, “You taught me how to live: Simply, Happily, Generously. Spreading joy and kindness wherever you went.”

Harlan has been a faithful member of Immaculate Conception Church of Osakis for many years and a constant supporter of St. Agnes School. He had an extra-large smile when the new playground was named after him.

Harlan was preceded in death by his beloved wife, Marie; sons, James and Donald; grandchildren, Joshua and Angelina; and daughter-in-law, Faye Tenhoff.

Harlan will be deeply missed by all who knew and loved him.

A Mass of Christian Burial will be held on Friday, March 11, 2022, at 11 AM at the Immaculate Conception Catholic Church in Osakis, MN with Father Tom Knoblach officiating.

A visitation will take place at the Roy-Hetland Funeral Home in Osakis on Thursday, March 10, 2022 from 5-7 PM with a 6:30 PM Time of Sharing followed by the Rosary.

A visitation will continue one hour prior to the mass on Friday at the church.

Interment will be in Calvary Cemetery in Osakis, MN

To order memorial trees or send flowers to the family in memory of Harlan Tenhoff, please visit our flower store.
Open