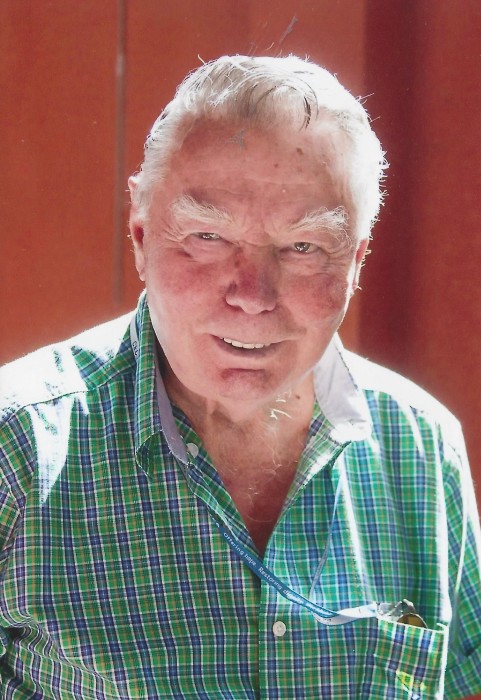 Visitation is from 5-8 p.m. on Thursday, February 20, at the Roy-Hetland Funeral Home in Osakis. Parish prayers will begin at 7:30 p.m., followed by a rosary led by the Knights of Columbus.  Visitation will continue at the Church of St. Bartholomew one hour prior to the funeral mass.

Harold James was born at his rural Osakis home on October 2, 1931, to James and Magdalena (Jennissen) Grundman.   He completed his education through the eighth grade and attended post-secondary agriculture school in Morris. He was united in marriage to Agnes Ferrian on May 30, 1952, at the Immaculate Conception Church in Osakis.  This union lasted 66 years until Agnes' death in 2018.  They farmed in the Osakis, Waconia, Anoka, Brooten, and Villard areas, until retiring to their home he built near Forada. Together they raised nine children and were proud grandparents of 30 grandchildren, fondly referred to as “Grandpa’s Angels”, and 22 great-grandchildren.  He was known to teach many of the grandchildren how to drive, sometimes ahead of the recommended age!  There was an endless supply of Smarties candy at his home- a reminder to the grandchildren of how smart they were! His extended family included the many children he sponsored through Unbound, most of whom he visited in their native countries of Guatemala and Bolivia. Many family members accompanied him on these life changing trips, which resulted in even more children being sponsored by those deeply moved by the needs of children and adults in impoverished countries.

Harold brought the meaning of the name “Grundman” (man of the ground) to life by farming his entire earthly tenure.  While farming, he spent time reading the latest research in agriculture magazines, exploring the latest and most innovative ways to farm, fertilize, and till the land in order to improve productivity, thus, producing quality crops.  Raising potatoes became an interest on sandy ground near Anoka, which then led to raising potatoes for many years with center pivot irrigation near Brooten and Villard.  He loved the dirt, his John Deere tractors, Ford trucks, and frequent drives to check the crops after they were planted.

Having too much time on his hands in retirement, he took to designing and building houses- houses built to withstand an F5 tornado! He then found much satisfaction in raising beef cattle for butcher, and did so until he was no longer able to, due to Parkinson's Disease.

He was an active member of the St. Bartholomew Church in Villard and the Knights of Columbus, which kept the family in a steady supply of Tootsie rolls.  He was preceded in death by his parents; wife, Agnes; sisters, Audrey Grundman, Carole Fogarty, Magdalene Dean; brother, Herbert; son, Steven; and two grandsons, Luke Grundman and Andrew Backowski.  Harold is survived by his eight children, Mark of Villard, John of Eagle Pass, TX, Audrey (Greg) Radermacher of Brooten, Julie (Merlin) Bruns of Sartell, Emily (Jay) Backowski of Villard, Dan (Cindy) of Starbuck, Anthony (Mary) of Elk River and Ann (Kenny) Proctor of Alexandria; daughter-in-law, Robin Grundman of  Farmington;  30 grandchildren; 22 great grandchildren; siblings, George (Barb) Grundman and Mary Christensen; sister-in-law, Marilyn Grundman;  and many nieces and nephews.

Arrangements by the Roy-Hetland Funeral Home in Osakis, MN. www.royhetland.com

To order memorial trees or send flowers to the family in memory of Harold Grundman, please visit our flower store.