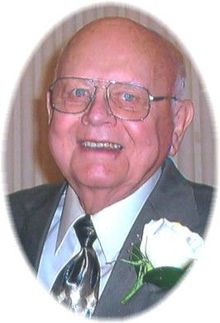 Life History for Harold Laven
Harold Laven, age 90 of Osakis went to meet his Savior early Monday morning, June 25, 2012 from his home in Osakis, MN.
On February 15, 1922 a baby boy was born to Arthur and Carrie (Swore) Laven in Osakis, MN. They named him Harold Arthur. He grew up in Osakis and attended Osakis Public School. As a young man, Harold escaped a close call with death when he and three friends avoided drowning after their car fell through thin ice on Lake Osakis. They managed to get out and stand on top of the Model A coupe until help arrived. In 1942, Harold was drafted into the United States Army to serve his country during World War II. He attained the rank of Staff Sergeant with the 3194th Signal Service Company. He was trained in switchboard operations and served in the European-African-Middle Eastern theaters. He also served in Germany and received the Theatre Service Medal, the Army of Occupation Medal and the Good Conduct Medal at his honorable discharge in June of 1946. On November 2, 1948, Harold married his sweetheart, Roberta Ritchie at the Osakis Lutheran Church. Harold returned to doing carpentry work with his father and brother, Ralph. He became a union carpenter, working primarily out of Alexandria. Harold helped build many of the brick buildings still in use around Osakis today, such as the Osakis Post Office, the Osakis Lutheran Church and the city's Water Treatment Plant. Harold was also an excellent woodworker, who made the baptismal fonts for both his church, Osakis Lutheran and also for the Osakis Methodist Church. Harold was very active in his faith and was involved in many areas of ministry at Osakis Lutheran over the years. He volunteered as an usher for over 43 years, was the church custodian for 12 years and also served on the church board. In addition, he volunteered at the Osakis Senior Center and made many visits to see the residents and have coffee at the Community Memorial Home.
Harold had many interests and hobbies. He loved to travel and took his family on many camping trips over the years. He would get out fishing year round but especially liked fishing for bass. He also liked to go hunting each fall, but went primarily for pheasants. Harold enjoyed working around his house and was meticulous when it came to caring for his lawn and garden. Square dancing was another favorite past time (Ya-hoo!) as was staying up on current events by reading newspapers and magazines. Harold always had a ready smile for anyone he talked to and made them feel like he was a friend. Harold's grandchildren remember the way he would clap his hands together and be so happy to see them. He was always interested in everything that was going on in their lives, and they all loved him dearly. He was a thoughtful, caring and loving husband, father, grandpa and brother who will be dearly missed by his family and many friends.
Surviving him is his wife of 62 years, Roberta Laven of Osakis; four children, Carol (Don) Nack of Alexandria, Jane (Kevin) Mohror of Chaska, Richard (Debbie) Laven of Dundas and Mark (Julie) Laven of Buffalo; 10 grandchildren; 10 great grandchildren; 2 step great grandchildren; a brother, Ted (Shirley) Laven of Junction City, KS and a sister, Janet Laven of Topeka, KS;nieces and nephews.
He is preceded in death by his parents, his brother, Ralph Laven and three infant siblings, Lucille, Ardis and James; father & mother-in-law, Bob & Neatta Ritchie.
Funeral services for Harold were held on Wednesday, June 27, 2012 at 11:00 am at the Osakis Lutheran Church with Rev. Lindell Quam officiating. Musicians were organist, Pat Converse and soloist, Kelly Smith. Interment was at the Gordon Pleasant Hill Cemetery in rural Osakis, MN with casketbearers, Jason Gustafson, Justin, Shawn, David and Eric Laven and Nathan Louwagie.

To order memorial trees or send flowers to the family in memory of Harold Laven, please visit our flower store.