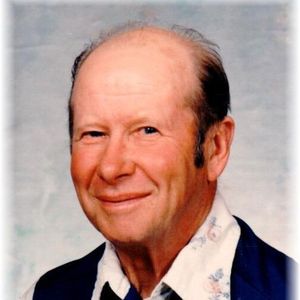 Harold Maus, 93 of Osakis passed away early Friday morning, July 7, 2017 in Osakis, MN.
Harold Donald Maus was born on September 19, 1923 in West Union Township, Todd Co., MN to Benhardt and Jennette (Emmick) Maus. He was the last born of their eleven children. He grew up and helped work the family farm from a young age. On October 9, 1945 Harold was united in marriage to Gloria Brouns. Gloria was also from a farming background. They both enjoyed life on the farm and farmed together well into their final years. They had a dairy farm and also raised sheep and pigs. In later years, after selling the dairy cows they raised Hereford beef cattle. They raised Shetland ponies and their favorite breed of dog, rat terriers for over 60 years. The family also had hound dogs for many years. Poultry raised included chickens (both laying hens for eggs and fryers), turkeys, guineas and ducks. In addition to farming, Harold also did carpentry work with his brother Albert and friend, Art Vangstad. Doing custom baling for local farmers, driving gas truck for Deluxe Oil and selling DeKalb seed corn were also supplementary jobs Harold had over the years. Harold also served on the Dist. 17 School Board.
As a bonus to raising their ponies and horses and dogs, Harold and Gloria enjoyed hitching their favorite ponies to buggies and/or riding them in area summer parades. Starting in 1957, they and their family participated in area parades for over 50 years.
Harold enjoyed nature and being outdoors, especially hunting for fox, raccoon, ducks, pheasants and deer each fall. He also enjoyed visiting with neighbors and friends.
He is survived by his children and their spouses, Nancy (Wayne) Johanson of Osakis, Richard (Linda) Maus of Gallati n Gateway, MT, Betty (Gary) Grinstead, Donald (Candace) Maus, all of Osakis, Donna (Ross) Abel of Ham Lake, MN; 11 grandchildren, Jeremy (Heidi) Maus, Carissa (Eric) Paulson, Jodi (Chris) Striegel, Matthew (Jamie) Maus, Mark Grinstead, Michelle (Jay) Stewart, Teresa (Chad) Wieneke, Tammy Maus, Scott (Crystal) Maus, Lisa (Jeremy) Heier, Brenda Abel; 18 great grandchildren; many nieces and nephews.
Preceding him in death is his wife, Gloria in 2013, a grandson, Kelly Maus in 2006, ten siblings, Bill, Albert, Arthur, Ralph, Lawrence, Jess and Clarence Maus, Mabel and Ethel Barber, Laura Schmidt.
Funeral services for Harold will be Saturday, July 15, 2017 at 11:00 am at the St. Alexius Church in West Union, MN with Deacon Stan Hennen officiating. Musicians are organist, Julie Bottelberghe and soloist, Dana Hetland. Lector is Tammy Maus, with special readings by Donna Abel and Lisa Heier. Casket bearers are all of his grandchildren and spouses, honorary bearers are his great grandchildren. Interment is at the Calvary Cemetery in Osakis, MN. Visitation hours are from 4 - 8 pm on Friday evening, July 14, 2017 at the Roy-Hetland Funeral Home in Osakis, MN and one hour before the service (10 am) at the church.

To order memorial trees or send flowers to the family in memory of Harold Maus, please visit our flower store.