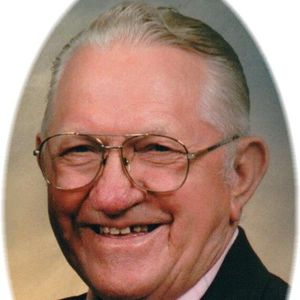 Life History for Harold Riedel
Harold Riedel, age 90 of Long Prairie, entered the peace of Heaven early Thursday morning, August 7, 2014 from the Centra Care Nursing Home in Long Prairie, MN.
On September 21, 1923 a baby boy was born to Emil and Minnie (Jahnke) Riedel in Parkers Prairie, MN. They named him Harold Emil and he was one of six children born to this union. Harold grew up near Parkers Prairie and was made especially aware of the gift of life after suffering from rheumatic fever as a child. After he met Laura Dent and fell in love, the two were united in marriage in Eagle Bend, MN on his twenty-sixth birthday. After a time living in Chicago, the Riedel's returned to Minnesota and settled in Coon Rapids and later Elk River while Harold operated a garbage collection business. Harold was a true jack-of-all-trades who could make or fix anything, no matter if it was electrical, mechanical or doing construction work. When they moved back to central Minnesota, the Riedel's lived in the Clotho area and then in Long Prairie, MN. Harold had a special interest in working with leather and founded a successful business doing shoe repair. In addition, he also made beautiful saddle-work and wood-work projects. Another of Harold's talents was playing music. He was a natural musician and learned on his own to play several types of instruments including the accordion, concertina, violin, mouth organ, and guitar. Harold was truly a family man who enjoyed being with and watching his children and grandchildren grow. Some of his best memories were made during summer family camp-outs, while playing horseshoes or going fishing. The watermelon seed-spitting contest was always a favorite of his. Dancing, gardening and playing pool with his friends were other hobbies he enjoyed. Harold had a strong faith and was willing to share his beliefs with others. He taught his family by example what it meant to be a witness for Christ.
Harold is survived by his wife of 64 years, Laura Riedel of Long Prairie; children, August (Marsha) Riedel of Clarissa, Virginia (Brad) Schroeder, Patty (Jim) Ostendorf and Marchell (Blair) Anderson, all of Long Prairie, Debra Prill of Little Falls and Mark (Tina) Riedel of Long Prairie; 17 grandchildren; 39 great grandchildren; two sisters, Florence Zwieg and Violet Carrico, both of Alexandria, MN.
He is preceded in death by his parents, two great grandchildren, Kylee Leagjeld and Tyler Thom; two brothers, Raymond and Emil Riedel, Jr. and a sister, Dorothy Beach.
Funeral services will be held on Monday, August 11, 2014 at 11:00 am at the Trinity Lutheran Church in Long Prairie with Rev. Noah Wehrspann officiating. Organist is Lila Rosenow. Interment is at Trinity Lutheran Cemetery with honorary bearers being Jeremy Schroeder and Lance Riedel. Active casketbearers are his grandsons, Adam, Cody and Stacy Riedel, Otis and Amos Ostendorf, and Andrew Prill.


To order memorial trees or send flowers to the family in memory of Harold Riedel, please visit our flower store.