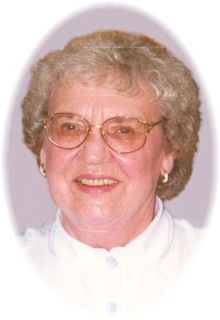 Life History for Harriet Lutgen
Harriet Lutgen, age 92 longtime Osakis resident, went to meet her Lord early on Tuesday morning, November 29, 2011 from the Douglas County Hospital in Alexandria, MN.
Harriet (Anderson) Lutgen was born on July 30, 1919 to Bernt and Marie (Togstad) Anderson. She was baptized on Sept. 1, 1919 in her home, and was confirmed as a young woman at the Sauk Valley Lutheran Church in rural Osakis on Nov. 20, 1932. Harriet graduated in 1937 from Osakis High School and then went to business school in St. Cloud, MN. She worked as a legal secretary for the Borchert and Metcalf attorneys in Osakis for three years. On Sept. 14, 1940, Harriet married Wilfred (Wiff) Lutgen at the Catholic parsonage in Osakis. They purchased the Coast to Coast hardware store in 1942. Wiff was drafted into the Army during WWII and was captured by the German army. He would survive a grueling 106 days as a prisoner of war. Harriet ran their hardware store because she always believed he would make it back. Upon his joyful return, the Lutgen's continued to own and operate the hardware store in Osakis for over 45 years, retiring in 1987. Harriet was a strong Christian lady who overcame many difficult times in her life by relying on her faith.
Harriet was a member of the Osakis Lutheran Church. She also belonged to the Osakis VFW Auxiliary, having served as their first president. She was a former Osakis Chamber of Commerce member and also belonged to her neighborhood sewing club.
Some of her interests included gardening, especially flowers, fishing, cheering on the Minnesota sports teams and stock car races. Her favorite cars were her gold Monte Carlo and a yellow GTO. Harriet was a loving mother and grandma who will be greatly missed.
Harriet is survived by her children, Ann (Doug) Lillemoen of Osakis, H. Michael (Carol) Lutgen of New Prague and Janet (David) Rudnik of Moundsview, MN; 8 grandchildren, Chris (Monica) Lillemoen, Melissa (Jeff) Wilkie, Amy (Matt) Cook, Matthew and Michael Lutgen, Chelsea (Joe) Bremer, Kris (Kerri) and Kyle Rudnik; 9 great, grandchildren, Brianna, Brayden and Jackson Lillemoen, Jacob Longley, Zach and Alex Wilkie, Andrew and Ashlyn Cook, Landon Hatton. She is preceded in death by her parents, her husband, Wiff and a son, John; two brothers, Morg and Ed Anderson.
Funeral services were held on Saturday, Dec. 3, 2011 at 2:00 pm at the Osakis Lutheran Church with Rev. Ron Calvert officiating. Organist was Pat Converse. Interment was at Calvary Cemetery in Osakis with pallbearers being her grandsons, Chris Lillemoen, Matthew and Michael Lutgen, Kris and Kyle Rudnik and Joe Bremer. Honorary bearers were the ladies of the Osakis VFW Auxiliary and her granddaughters.

To order memorial trees or send flowers to the family in memory of Harriet Lutgen, please visit our flower store.