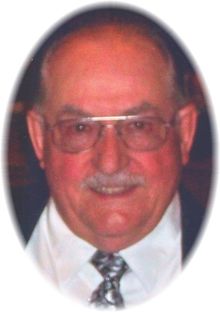 Life History for Harry 'Pat the Barber' McLain
Harry 'Pat the Barber" McLain, age 79 of Osakis left his earthly home on Thursday, June 6, 2013 from the St. Cloud Hospital/VA Hospital in St. Cloud, MN where he had been a patient for the past 30 days.
On February 18, 1934 a baby boy was born in Minneapolis, MN. His parents were Orlo E. Bidleman and June E. Lauzon and he was named Harry Patrick. He was soon known by his nickname of Pat. After high school, Pat served his country in the United States Navy during the end of WW II into the Korean War. On November 17, 1956, Pat married his sweetheart, Helen Kremer at St. Andrew's Catholic Church in Elk River, MN. Pat then worked for various companies in the metro area, including Northern States Power Company, Napco and Minneapolis Moline. In 1958 he attended barber school and began his career by apprenticing in Minneapolis. After a couple of years of experience, Pat and Helen moved to Osakis, MN when Pat and Helen purchased the barber shop from Fred Gelle, which soon became known as Pat's Barber Shop. Pat would continue cutting hair for people in the Osakis community for over fifty years. Pat was a member of the Immaculate Conception Church in Osakis.
Pat was very active in his community. He was a member of the Osakis Chamber of Commerce. Pat was also a long time member of Osakis VFW Post #7902 and the Franklyn J. Lyon American Legion Post # 111 where he proudly served as commander in both organizations. In addition, Pat served the Osakis community as a member of the Osakis Volunteer Ambulance crew for over twenty years. Pat was a member of the Osakis Masonic Lodge, where he served as Master and also as a member of the Alexandria Shine Club.
There were many hobbies and past times that interested Pat. He liked to go hunting and fishing, work in his garden and also was on a bowling league for many years. He especially enjoyed socializing with fellow veterans and supporting the activities of the Osakis V.F.W.
Pat was a man of integrity who willingly gave of his time and talents for the benefit of others. He was a loving husband, father, grandpa, brother and uncle who will be dearly missed by his family and friends. Blessed be his memory.
He is survived by his wife of fifty-six years, Helen McLain of Osakis; a daughter and son-in-law, Theresa and Mark Oslund of Minnetonka; son-in-law, Jim Niehoff of Eveleth; 4 grandchildren; 5 great grandchildren; siblings: Orlo M. 'Mike' Bidleman of Starbuck, David 'Duff' McLain of Osakis, Jeff "Jeffy Joseph" (Laurie) McLain of Quitman, AR., Fred C. Larsen of Evansville, MN, and brother-in-law Al Armagost; many nieces and nephews.
Preceding him in death are a daughter, Paula Niehoff, his parents and a sister, Geraldine Armagost.
A Mass of Resurrection will be held for Pat on Monday, June 10, 2013 at 10:30 am at the Immaculate Conception Church in Osakis with Fr. Dick McGuire officiating. Interment following service at the Calvary Cemetery in Osakis with military honors provided by the Osakis VFW Post 7902 Honor Guard. Active pallbearers are Christopher Oslund, Daniel Oslund, Mark Oslund, Jim Niehoff, Erika Niehoff, Amanda Roos. Honorary pallbearers are members of the VFW Post 7902 Osakis, MN.

To order memorial trees or send flowers to the family in memory of Harry McLain, please visit our flower store.