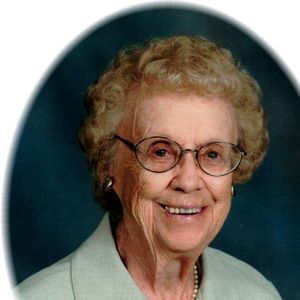 A Mass of Resurrection will be held on Wednesday, August 12 at 11:00 am at the Immaculate Conception Catholic Church in Osakis with burial at the St. Nicholas Cemetery in Belle River, MN. Visitation will be Tuesday, Aug. 11 (5 - 8 pm with a 7:30 rosary) at the Roy-Hetland Funeral Home in Osakis and one hour before the service at the church.

Helen Allen, age 97 of Osakis went to her heavenly home early Saturday morning, August 8, 2015 from the Community Memorial Home in Osakis, MN.
On September 8, 1917 a daughter was born to William and Katherine (Hagan) Quinn in Belle River Township, Douglas County, MN. She grew up on a farm and attended Dist. # 62 country school through the eigth grade. She went to high school in Alexndria and an additional year of Normal school for her teaching certificate. She taught two years in Dist. # 41 and then returned for additional training at the Teacher's College in St. Cloud. Helen returned to Douglas County and taught in Carlos and Alexandria before taking a position in Cloquet. She was licensed to teach grades one through eight but enjoyed the younger grades. Helen continued her education during the summers at both the Univ. of Colorado and the U of M until she had completed her Bacholor's of Science degree. She was hired for a position with the Minneapolis Public Schools and taught until her retirement in 1968. On October 20, 1962 Helen was united in marriage to Edward Allen at Annunciation Catholic Church in Minneapolis, MN. They moved to a beautiful home on Lake Osakis in 1974.
Helen was a member of the Immaculate Conception parish in Osakis and belonged to the Daughters of Isabella and the St. Elizabeth mission group. For over 50 years she was a member of the Delta Cappa Gamma, an honorary teacher's sorority.
Helen was an accomplished card player who especially enjoyed playing Bridge. She was an avid reader and also enjoyed gardening, dancing and getting out on the lake for boat rides and fishing. She liked to travel and looked forward to their winter trips to Arizona and Florida.
Though she never had children of her own, she was a kind, generous and doting aunt to her nieces and nephews and the many children whose lives she touched during her teaching career.
She is survived by her nephew, Tom (Cheryl) Quinn of Prudenville, MI; two nieces, Mary (Dennis) Grythe of Sauk Centre and Diane Liesemeyer (Donald Gustafson) of Osakis, along with her late husband, Ed's nieces and nephews and many great nieces and nephews.
Honorary bearers are Rose and Fred Julig. Active bearers are Rory, Jonathan, and Dana Robinson, Brian Quinn, Jordan and Sean Liesemeyer.
Preceded in death by her husband, Edward in 1976; her brother, Desmond Quinn in 2007.

To order memorial trees or send flowers to the family in memory of Helen Allen, please visit our flower store.