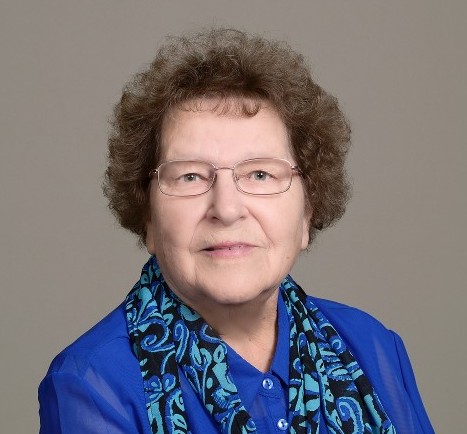 Helen Botzet, age 80 of West Union/Osakis passed away on Friday, June 29 at her home.  Funeral services will be Tuesday, July 3, 2018 at 11:00 am at St. Alexius Catholic Church in West Union.  Interment is at the church cemetery.  Visitation hours are from 5 – 8 pm on Monday, July 2 at the Roy-Hetland Funeral Home in Osakis and one hour before the service at the church.  Parish prayers begin on Monday evening at 6 pm and a Christian Mothers rosary will be said at 7 pm.

Helen Kathryn Botzet was born on October 16, 1937 to Louis and Kathryn (Schimek) Warmka in Albert Lea, Minnesota, as the second of twelve children.  She was raised on the family farm in Easton, Minnesota.  She graduated in 1955 from Our Lady of Good Counsel of Mankato and attended College of St. Benedict, receiving her bachelor’s degree in education in 1959.  Helen accepted a teaching position from the Osakis Public Schools and began a life-long career teaching elementary students.  She primarily taught sixth graders and retired in 2002 after 39½ years of teaching.  She loved her students and was proud of their successes as adults.

She was introduced to the love of her life, Sylvester Botzet, at her classroom door by the school custodian.  They were soon married on August 16, 1961 in Easton.  They made their home on the Botzet family farm near West Union, which was first settled in 1888 and honored as a Century Farm in 1988, of which Sylvester and Helen were the third generation.  While she was a busy farm wife and dedicated teacher, Helen was most fulfilled by being a mother.  Over the years she also had the joy of becoming a grandma and eventually a great-grandma.  Her great-grandchildren lovingly referred to her as “super-grandma”.

She was a member of the St. Alexius Catholic Church in West Union, and she both taught C.C.D. and also served as a member of the Christian Mothers. She hand-made rosaries that she was honored to share with each year’s First Communion class, as well as to friends, family, and the missions.

Helen and Syl were instrumental in beginning the local 4-H Club known as the West Union Country Kids.  Each year, they both worked together to raise a beautiful garden and then would shared this bounty.  Helen also took great pleasure in sharing her homemade (and renowned) raspberry and ground-cherry jams with family and friends.

Helen had a special gift of love for the Lord and others.  She gave of herself and used her talents to spread God’s love.  She was a selfless, hard-working, loving and dedicated wife, mother, grandma, great-grandma, and sister who will be dearly missed.  Blessed be her memory.

Helen will live on in the hearts of her family, her children, her grandchildren, Joshua Meehl and wife Alyssa of Osakis, Jordan Meehl and wife Pam of Rochester NY, Tyler and Diana Schwictenberg of Madison WI, and two great grandchildren, Sebastian and Katarina Meehl; her siblings and their spouses, James Warmka of Wells MN, Margaret Barrett of St. Paul., Rosemary Cavadini of Bangor WI, Norbert Wilder of Albert Lea MN, Thomas (Cheryl) Warmka of Easton MN, John (Carol) Warmka of Grand Meadows MN, Daniel (Deb) Warmka of Easton MN, and many, many nieces and nephews.

Helen was preceded in death by her parents, her dear husband, Sylvester with whom she spent 50 years; a grandson, Jacob Botzet; siblings and their spouses, Marian Warmka, Thomas Barrett, Don Cavadini, Kathleen Wilder, Rita and John Haley, Edward, and Kenneth and Sherry Warmka and an infant sister, Mary Ann Warmka.

A Mass of Ressurection will be held for Helen on Tuesday, July 3, 2018 at 11 am at the St. Alexius Catholic Church in West Union with concelebrants, Fr. Greg Paffel and Fr. Andrew Marthaler.  Musicians are the church choir with Julie Bottelberghe as organist and soloist, Dana Hetland.  Lector is Karen Deters and gift bearers are her grandchildren.  Inurnment is at the St. Alexius Cemetery with the honorary bearers being her siblings and their spouses.  Active pall bearers are Jeff and Shane Deters, Irvin and Kenny Frie, Mark Grinstead and Kelly Marthaler.

To order memorial trees or send flowers to the family in memory of Helen Botzet, please visit our flower store.