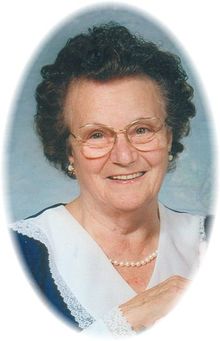 Life History for Helene Schauer
Helene M. Schauer, age 92 of Osakis, formerly of Long Prairie, passed peacefully into Heaven on Saturday, June 1 at the Diamond Willow Assisted Living in Alexandria, MN.
Helene was born on September 6, 1920 to Harvey and Mabel (Nelson) Williams in West Union Township, Todd County, MN. She was baptized and confirmed in St. John's Lutheran Church of Villard, MN. She was the fifth child in the family and had four brothers and two sisters. At the age of ten, Helene moved with her family to Balaton, MN. She graduated from high school there on June 1, 1939. She married Elmer H. Schauer on December 31, 1940 at the Faith Lutheran Church in Balaton. They moved to a farm near Eagle Bend, MN where Helene help farm and raised their three daughters and a son. In 1965 they purchased a farm near Long Prairie. They farmed there until their retirement when they moved to a home in Osakis, MN in 1999. Helene was a member of the Trinity Lutheran Church and belonged to and served as president several times for the Ladies Circle.
Some of Helene's favorite past times included gardening, quilting, playing cards or dominos and baking, especially cookies. She also enjoyed spending summers near Big Pine Lake and Lake Elmo. She was a kind and hardworking mother, grandma and sister who will be dearly missed by her family and friends.
She is survived by her daughters, Bev Kaun (Norm) Nicholson of Wadena, Cathe (Joel) Anderson of Parker, CO, Jen (Tom) Weibye of Carlos, MN; 13 grandchildren; 23 great, grandchildren; a sister-in-law, Ardith Williams of Garvin, MN.
Preceding her in death are her parents, her husband, Elmer on October 4, 2004, a son, Eugene in 2002, a son-in-law, William Kaun; 4 brothers, Carl, Leslie, Dale and Clair 'Bill' Williams; 2 sisters, Carrie Thurk and Ethel Dayland.
Funeral services for Helene will be held on Thursday, June 6, 2013 at 2:00 pm at the Trinity Lutheran Church in Long Prairie with Rev. Paul Biegner. Musicians are Joyce and Lila Rosenow. Interment is at the Trinity Cemetery in Long Prairie. Honorary pall bearers are Jodi Kosel, Holly Cook, Nicole Galuzzo, Lisa Crosby, Shelly Weibye, Jacob Schauer, Kelly Grack and Eddie Weibye. Active bearers are Rick Kaun, Jesse Schauer, Cory Anderson, Toby Weibye, Brad Kaun, and Chris Thurk.
Arrangements handled by the Roy-Hetland Funeral Home, Osakis, MN.

To order memorial trees or send flowers to the family in memory of Helene Schauer, please visit our flower store.