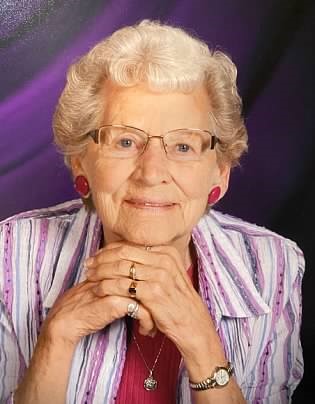 Hester Benedict of Osakis, having just celebrated her 96 birthday on April 4, passed away unexpectedly on Thursday, April 9, 2020 in Alexandria, MN.

Hester King Stradtner was born in Vincennes, Indiana to John and Edna (Like) Stradtner.  She was their only daughter with one sibling, her brother, John.  Hester graduated from Monroe City High School in Indiana with the Class of 1941, after reading every book in the school library.  Her first employment was doing clerical work for a local Vincennes business.  While the rest of the country was still reeling from the challenges of WWII, Hester met the love of her life, Lawrence Benedict, when he was stationed at a nearby Air Base and they were united in holy matrimony on November 17, 1943. They moved to Arkansas for a time before heading north to Lamberton, MN where Lawrence worked as a plumber.  In 1949, they moved first to Glenwood, MN, but eventually settled in Osakis, MN and became very involved in their new community.  Hester belonged to the Immaculate Conception Church and used her beautiful soprano voice in the church choir.  She also belonged to the Christian Mothers and Daughters of Isabella women’s groups, as well as helping serve for funeral lunches.  She relied on her strong faith in God when life sent her the heartache of losing a son.  Bridge clubs were very happy to have her join them and she and Lawrence also belonged to the Osakis Country Club.  Hester’s primary job, however was raising their seven children.  In 1985, when Lawrence could start cutting back on his busy schedule, the Benedicts were able to travel in the fifth-wheel camper they owned.  Hester loved traveling and they explored the U.S. from one coast to the other.  They especially enjoyed wintering in Winterhaven, FL and made that an annual stop and second home during the cold winter months.

With a large family to feed, Hester made good use of her cooking talents.  She loved to cook and made many homemade meals her own crew and many others that were invited to the table.  She was a sharp card player and enjoyed both Bridge and Cribbage.  She liked handiwork, such as crochet, needlework and quilting.  In the summer months she liked to get out golfing and socializing outdoors with family and friends and looked so forward to the summer family reunions.  Hester also volunteered at the Community Memorial Home.  Her love for family taught them the values needed to be confident, able caregivers to their own children.  She loved her grandkids and was always ready to support them in all of their endeavors.  Her big smile and happy disposition will be a lasting legacy.  May she rest in the peace knowing she will live on in the hearts of those she left behind.

To order memorial trees or send flowers to the family in memory of Hester Benedict, please visit our flower store.