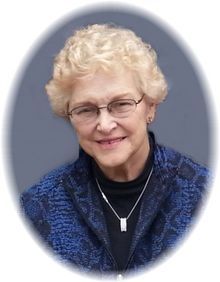 Hilda Hector, age 84 of Osakis, died peacefully at her home in West Union Township, Todd County, MN Friday, June 13, 2014 after a courageous seventeen month fight with lung cancer.
On June 27, 1929 in Lady Smith, Wisconsin, Ernest and Anne (Messing) Schwendemann became the proud parents of a baby girl, one of seven children born to their union. Hilda grew up in Wisconsin and then moved to DeGraft, MN as a young girl. After her schooling, Hilda began working as a clerk at the drugstore in Glenwood, MN. She was married to Merlin O. Pladson on October 8, 1949 in Glenwood, and had a son they named Mark. After Merlin died March 6, 1954 from polio, Hilda moved to Osakis where she took a job as a dental assistant for Dr. J.A. Jacobsen. It was working here that she met Charles Hector, and they were married on Valentine's Day, Feb. 14, 1959 at Osakis Lutheran Church. The Hector's farmed in West Union Township and were members of the Sauk Valley Lutheran Church. Hilda was very active at Sauk Valley as a member of the choir, as a Sunday School Superintendent and she also belonged to the quilting club and Ladies Aide, of which she served as an officer. As her family grew, Hilda also became active as a leader of the Kendota Klimbers 4H club and served as assistant Todd County Fair food judge. She was the 4H club food chairperson for over 25 years. Hilda also belonged to a homemaker's club and served on the Todd County Human Services Board for eight years.
Some of Hilda's favorite past times included quilting, cooking delicious meals and goodies for her family and tending her beautiful flower and vegetable gardens. She always had a large patch of raspberry bushes and shared the surplus of her garden with friends and neighbors. She was a talented, loving wife, mother, grandmother and sister who will be dearly missed and fondly remembered by her family and friends.
Hilda is survived by her husband, Charles Hector of Osakis; her children, Mark (Janet) Pladson of Bloomington, Connie (Dan) Hellermann of Sauk Centre, Carol Jean (Arthur) VanVranken of Alexandria, Rikka (Todd) Hector-Burrer of Omaha, NE; 6 grandchildren, Kristy (Jordan) Harth, Eric (Michelle) Hellermann, Kayla (Andre) Terry, Nicole (Matt) Pladson, Zachary Pladson, Kirk Pollard; 6 great grandchildren, Tyler, Talia, Nora, Sylas, Lola and Brynn; sister, Clara Wiebold of Benson; 3 sisters-in-law, JoAnn Broom, Elaine and Wanda Schwendemann and a brother-in-law, Harland (Salina) Hector; many nieces and nephews.
Preceded her in death are her parents, her first husband, Merlin and siblings, Anne Masters, Herman, Walter and John Schwendemann, Lucille Olson.
Funeral services were held Monday, June 16, 2014 at 2:00 pm at Osakis Lutheran Church with Rev. Don Reisig and Rev. Steve Hilde officiating. Musicians were Gordon Mens Choir with Juanita Klukken as accompanist. Readers were Dr. Arthur VanVranken, Todd Burrer and Bob Thielen. Interment is at the Sauk Valley Lutheran Church Cemetery in rural Osakis. Honorary bearers were both Sauk Valley and Salem Lutheran Ladies Aide and her quilting and prayer group 'angels.' Active bearers were her nephews, James, Jason, Paul, Larry and Robert Schwendemann, Darrell and DuWayne Olson and Ronald Wielbold.
Memorials are preferred to Douglas County Hospice of Alexandria, MN. The family would also like to thank Douglas County Hospice for their support, love and amazing care.
Arrangements were handled by the Roy-Hetland Funeral Home in Osakis, MN.

To order memorial trees or send flowers to the family in memory of Hilda Hector, please visit our flower store.