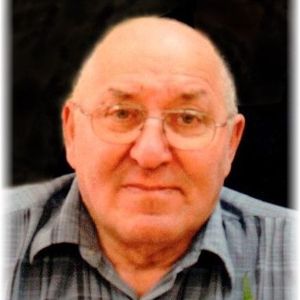 Howard Majerus, age 74 of Osakis entered his new life on August 26, 2016 from the Galeon in Osakis, MN.
Memorial services for Howard will be held on Saturday, Sept. 10 at 11:00 am at Immaculate Conception Church in Osakis with Fr. Dave Petron officiating. Visitation hours are from 4 - 8 pm on Friday evening, Sept. 9th at the Roy-Hetland Funeral Home and also one hour before the service at the church.
LIFE HISTORY FOR HOWARD -
Howard Joseph was born to Leo and Hildegard (Elfering) of Sauk Centre, MN, on May 26, 1942a�"one of 12 children born to this union. Both Leo and Hildegard died young and it was because of that difficulty that he and his siblings learned the importance of hard work and the value of family. He graduated from Sauk Centre High School in 1960 and, after high school, worked in construction and joined the National Guard. Howard married Janice Lentz on October 13, 1962, at St. Paul's Catholic Church in Sauk Centre. The couple farmed near her parents' farm north of Sauk Centre until 1967 when they bought their own farm near West Union, MN. In addition to farming and raising a family, Howard belonged to the Sauk Centre Flying Club where he took flying lessons from Donald Kummer. He quickly earned his pilot's license for single engine airplanes and a separate license for flying helicopters; his family has many fun memories of flying in the yellow Piper Cub plane, including landing in his runwaya�"the family's alfalfa field! Howard's flying adventures inspired four of his friends to take lessons and become pilots. After Howard and Janice moved to a home near Lake Osakis, Howard was employed with Pollard's Mills and Elevator and Osakis Meats & Processing. He also was a school bus driver for the Osakis Public Schools and it was there he developed and patented a seat belt system for school buses. Howard wrapped up his career at Engle Fabrication in Sauk Centre. After becoming disabled in a skid loader accident in 1996, Howard was no longer able to work. Although he lost his mobility, he never lost his smile and sense of humor. He was always ready to make new friends and loved to socialize and be around people. Famous for his homemade sauerkraut, Howard had a green thumb that he put to good use in his vegetable garden. He also had a knack for small engine repair and often could be found in his shed working on a variety of projects. Other favorite activities included fishing and attending area antique sales. Howard's grandchildren were delighted that he was the official "daycare" provider for them whenever they didn't have school. He was a wonderful and kind husband, father, grandpa, and brother who will be dearly missed by his family and friends. Blessed be his memory.
Howard is survived by his wife of 53 years, Janice Majerus of Osakis; children, Ronald (Dianne) Majerus of Osakis, Sandra (Greg) Lieser of Forada, Lori (Bob) Harguth of Ham Lake, Marie (Brian) Niehoff, Brenda (Brian Bangtson) Majerus, and Sara (Kevin) Uhlenkamp, all of Osakis, and Adam (Amy) Hartle of Fort Sill, OK; 13 grandchildren; siblings, Delores (John) Ainali of St. Rosa, Leona (Virgil) Voller of Newport, Evelyn Krebs of Albany, Ben (Karen) Majerus of Sauk Centre, John (Rosanne) Majerus of St. Stephen, Rosemary (Rahn) Mogensen of New Brighten, JoAnn (Ron) Tamm of Albany, Sylvester (Annette) Majerus of St. Stephen, Steven Majerus of Philadelphia, PA, and Karen (Mark) Gamradt of Sauk Centre; brother-in-law, LaVern 'Mooey' (Susan) Beckermann; sisters-in-law, JoAnn (Jim) Fynboh and Doreen Lentz; special family friends, Dave and Susan Crotteau and their children, Darcie, Matt, Jackie, and Josh; and many nieces, nephews, and cousins.
Preceding him in death are his parents; an infant daughter, Mary; sister, Alvina Beckermann; and best friend, Ron Kollman.
Memorial services for Howard will be Saturday, September 10 at 11 a.m. at Immaculate Conception Church in Osakis with Fr. Dave Petron officiating. Crossbearer is Mitchell Majerus and lector is Jim Fynboh. Giftbearers are Zachary Harguth, Katie Niehoff, Meredith Lieser, and Brody Uhlenkamp. Musicians are Ginger Hetland, Gretchen Majerus, Brody Uhlenkamp, and the ICC Funeral Choir. Honorary urnbearers are his grandchildren and special family friends. A reception will be held at the Osakis VFW Post #7902 following the service. The family thanks Horizon Public Health Hospice and the staff at Galeon for their loving care.
Howard's family thanks you for your kind expressions of sympathy. Please know that although we can't respond to each kindness offered during this time, your expressions of sympathy are deeply felt and appreciated.
Arrangements provided by Roy-Hetland Funeral Home, Osakis, MN.

To order memorial trees or send flowers to the family in memory of Howard Majerus, please visit our flower store.