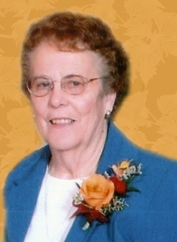 Iona ‘Onie’ Schlosser Wolbeck, age 88 of Osakis, formerly of Carlos, passed away early Monday, Nov. 9 from the Galeon in Osakis, MN where she was a resident.

Private family services will be held at New Life Christian Church in Alexandria with Pastor John Taplin officiating. Her service will be recorded and available to view later on the funeral home website.  Interment is at the Pleasant Mound Cemetery in Clotho, MN.  Condolences and memories may be left for Onie at www.royhetland.com under her Tribute page.  Arrangements by the Roy-Hetland Funeral Home in Osakis, MN.

Earth lost a treasure early Monday morning, Nov. 9, 2020 when Onie Schlosser Wolbeck, age 88 left this life to return to her heavenly home from the Galeon in Osakis, MN where she had been a resident.

Iona Gladys Judd was born the day after Christmas in 1931 to Clarence and Dora (Perreten) Judd in Osakis, MN.  She grew up helping on the family farm and caring for her younger siblings.  She graduated from Osakis High School in 1950 and went to work in the Twin Cities.  In July of 1950 she married her sweetheart, Melvin Schlosser and they worked in the Cities before moving back in 1953 to a farm in rural Carlos, MN.  No stranger to milking cows, Onie was in the barn every day and night in addition to raising their two children Mike and Eileen.  Onie loved to garden. She always had a large garden filled with raspberries, strawberries, tomatoes, peppers, squash and all the fresh vegetables you could want. Her ability to grow and preserve her food was a great blessing to her family. She was famous for her raspberry rhubarb jam and apple bars. Raising chickens, baking and making delicious home-cooked meals brought her joy and kept her very busy.  She still found time however to volunteer as a 4-H leader, belonged to the Trail Blazers Saddle Club (Onie had grown up with horses and enjoyed seeing her family learn to appreciate them) and still found time to take in community birthday clubs and card parties.  After many years of farming, Melvin and Onie built a new home on the edge of the farm in 1982 and retired in 1990.  After Melvin’s death in1994, Onie found comfort going to dances with her friends where she met a fine dancer one night at an old-time dance named Joe Wolbeck.  He too had lost his spouse. They discovered that not only did they make a great dancing team, but a perfect pair, as well, and in 2000 they were married. Onie immediately gained a second extended family, including eleven children, Andy & Sherrie Wolbeck, Gerald & Debbie Wolbeck, Lyle & Sharon Barthel, Dan & Sharon Wolbeck, Linda (John) Wielenberg, Dean & Jackie Wolbeck, Duane Wolbeck, Mark & Jeanne Wolbeck, Jim & Lisa Rudnick, Lois Wolbeck and Shawn & Stacie Wolbeck; 25 step grandchildren and 20 great step grandchildren.  She loved them all as her own and never blinked an eye at becoming part of this large family.

Onie was a member of the New Life Church in Alexandria and enjoyed attending Bible studies and helping at church.  She also enjoyed making quilts for all of her grandchildren and step grandchildren. In earlier years she also belonged to the Clotho social group. Onie’s life-long love of cooking also came in handy when she worked at the family food business Rose City BBQ.  She was so proud to be part of the team and watch it grow into a thriving operation. Onie especially loved to teach her grandkids how to cook and bake and together they spent many happy hours in Grandma’s kitchen.   After Joe’s death, Onie moved into the Wind Mill Ponds in Alexandria but when her memory started fading she moved into the Galeon in Osakis in 2019.  Working tirelessly without complaint and showing daily her love for Jesus and neighbor were qualities all would be well to model.  She was a loving mother, grandma and sister who will be dearly missed and never forgotten.

Private family services will be held at New Life Christian Church in Alexandria with Pastor John Taplin officiating. Her service will be recorded and available to view on the funeral home website.  Interment is at the Pleasant Mound Cemetery in Clotho, MN.

Condolences and memories may be left for Onie at www.royhetland.com under her Tribute page.

To order memorial trees or send flowers to the family in memory of Iona Schlosser Wolbeck, please visit our flower store.