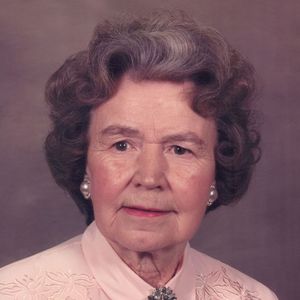 Life History for Ione Holt
Ione Othelia Stenson was born on June 9, 1916 in Dawson, MN, the second daughter of Samuel and Inez (Solberg) Stenson. Moving to Alexandria, MN the Stenson family continued to grow until there were five children, four daughters and one son. The family was very active in the First English Lutheran Church congregation later known as the First Lutheran Church. Her father was the Sunday School Superintendent and her mother taught the eighth grade class. After her confirmation, Ione continued to grow in her faith. She was active in Sunday School, youth activities and the choir. Graduating from Central High School in Alexandria, Ione found a secretarial job and continued to develop her office management skills. Ione was employed as a legal secretary for many years. She worked as a secretary to Percy Unumb and later as administrative assistant to Evelyn Graf at the Community Memorial Home. She also worked for lawyers, Paul Flora and Neil Johnson.
When Ione met James Luverne Holt, their joyous relationship added a new chapter to both of their families with their wedding on New Year's Eve, December 31, 1939 at the First Lutheran Church in Alexandria, MN. With Jim's employment at the Osakis Post Office, their first home was at the Idlewilde Resort while their new home on Lake Street was being built. The Holt's were blessed with three sons and a daughter. Jim would advance in his career to become a postal inspector and postmaster.
Ione and Jim put a high priority on providing fun for their family and they all enjoyed the benefits of living near the lake. The Holt's were very supportive of their children's ventures. Their home reflected hospitality in every respect. The delightful fragrance of Ione's talents in the kitchen while cooking, baking (esp. caramel rolls and apple pies) or canning was a joy to all who frequented the home. When a family member or friend was dealing with an illness or death, she would bring them home-baked goods and/or send a card. She remembered all of her family's birthdays and special occasions with cards and gifts. She also enjoyed sewing.
Ione was an active member of Osakis Lutheran Church where she taught Sunday School and volunteered as treasurer for many years. She was a member of the choir for sixty years and also sang for many weddings and funerals. She participated in weekly Bible studies and was also active in the Esther Circle, a sewing club and belonged to the Community Memorial Home Auxiliary.
After Jim's death on March 15, 1987 Ione continued to reside in Osakis, living in her own home for over 71 years. She loved the Osakis community and her faithful witness has strengthened the spiritual foundation of her family and community. She left a personal testimony in her Will that the family has chosen to share - "First, I hereby declare that I believe in Jesus Christ and have accepted Him as my Lord and Saviour, together with all the promises He has given us for this life and for all eternity. It is my prayer that all who read this Will find the same joy and fulfillment which I have found through belief in the Risen Christ. I believe that my death on earth is not a sad ending, but rather a joyful reunion with my belovd husband, James and all Christians who have died before me and with my Heavenly Father. I am forever grateful to my parents who raised me in a loving Christian home and to my beloved husband, family and friends who have helped sustain my faith."
Ione was preceded in death by her parents, her husband, Jim and her sisters, Stella and Eunice.
She is survived by her children, Douglas Holt of Osakis, Curtis (Gail) Holt of Maui, Hawaii, Robert (Debbie) Holt of Austin, MN and Darla (David) Kaiser of Alexandria, MN; 9 grandchildren; 2 great, grandchildren; a sister, Audrey (Jim) Pearson of Soldotna, AK and a brother, Stanford Stenson of Rapid City, S Dakota.
Funeral services for Ione will be held on Friday, October 26 at 11:00 am Osakis Lutheran Church with Rev. Ron Calvert officiating. Musicians are her family members and the organist is Pat Converse. Interment is at the Lakeside Cemetery in Osakis, MN.
Honorary casket bearers are grandchildren, Trisha, David and Laura Holt, her godson, Paul Stenson, friends, James & Luverne Adams, Harley Anderson, Don & Jean Jensen, Marilyn and Neil Johnson, Hazel Holt. Serving as active casket bearers are six of her grandchildren, Denise, Andrew, Travis and Andrea Holt, Julie Meyer and Stephanie Kaiser.
Arrangements are being handled by the Roy-Hetland Funeral Home in Osakis, MN.

To order memorial trees or send flowers to the family in memory of Ione Holt, please visit our flower store.