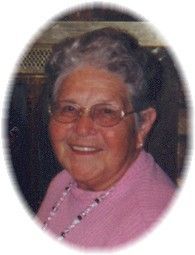 Life History for Irene Johnson
Irene Johnson, lifetime resident of the Osakis area passed away unexpectedly at the age of 85 years at the Community Memorial Home in Osakis, MN.
Irene Joyce Johnson was born on May 31, 1925 in Gordon Township, Todd Co., MN to Jesse and Lula (Averill) Johnson. She grew up on the family farm and attended country school, Dist. # 23 in Gordon Township. On June 10, 1947 Irene married Wallace Johnson (thus not even having to change her last name)at her home church, Salem Lutheran in rural Osakis. In addition to raising her daughter, Irene also enjoyed life in the country. She helped with the farming, raised chickens and enjoyed being a homemaker.
Irene was a member of the Salem Lutheran Church and belonged to the church choir and served on the Ladies Aide. She was a member of the Gordon Birthday club and also attended neighborhood Bible studies. Some of her favorite hobbies included quilting, gardening, canning and snowmobiling. She was a kind and caring mother, grandma, sister and aunt who will be dearly missed and loving remembered by her family and friends.
She is survived by her daughter, Wanda (Robert) Walsh of Stacy, MN; granddaughters, Dawn Egan and Darcy (John) Hiland, both of North Branch; 2 great, grandsons, Mark and Tyler Hiland; a brother, Jesse Johnson of Osakis and a brother-in-law, Johnny Johnson of Osakis; many nieces and nephews.
She is preceded in death by her parents, her husband, Wallace in 1986 and two sisters, Roma Johnson and Theone Redning.
Funeral services for Irene will be held on Tuesday, August 24 at 2:30 pm at the Salem Lutheran Church in rural Osakis with Rev. Steve Hilde officiating. Musicians are organist, Ione Johnson and soloist, Dana Hetland. Interment is at the Salem Lutheran Church Cemetery. Pallbearers are John Halquist, Bennie Redning, Jim Hiltner, Lee Christopherson, Allen Starry and Gary Mikkelson.
Arrangements were handled by the Roy-Hetland Funeral Home in Osakis

To order memorial trees or send flowers to the family in memory of Irene Johnson, please visit our flower store.