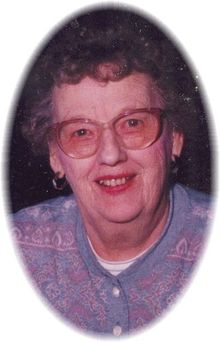 Irene Pederson, age 92 of Maple Plain, formerly of Alexandria, passed away on Monday morning, June 20, 2011 at the Haven Homes of Maple Plain and has gone to join her beloved husband, Marvin, her spouse for 58 years, who preceded her in death in 1993.
Irene Cecil Pearson was born on January 12, 1919 in Rose Hill, Iowa to Francis Harvey (Hick) and Elsie Lenora (Moore) Pearson. Along with six brothers and sisters her family moved to Osakis, MN in 1925. She attended school in Osakis and on February 17, 1935 was married to Marvin Pederson. They started their family of five in Osakis but moved first to Kensington in 1961 and then settled in Alexandria in 1963. Irene and Marv took in and helped relatives and friends whenever there was a need, sharing their home and everything they could. Irene was a homemaker while all the kids were young but she later worked as a waitress for many years at the lunch counter at Garden Center Lanes in Alexandria, creating an extended family of friends and acquaintances that still exists today.
Irene enjoyed gardening, music, knitting, crocheting, refinishing antique furniture and bowling. She was very determined, skillful and focused in all of her endeavors. An avid sports fan, she followed her Vikings, Gophers and Timberwolves teams faithfully. She attended every sporting event her children were involved in and many of the events her grandchildren participated in until she was slowed by a stroke in 2000, which occurred at one of her granddaughter's basketball games. She was intelligent, forthright and also possessed a marvelous sense of humor. These traits made her a wonderful spouse and exceptional and loving parent. She has been a source of strength and inspiration to her large family and to all that knew her. Since her stroke, Irene has lived in Long Lake Nursing Home, Long Lake, West View Assisted Living in Osakis and finally at Haven Homes in Maple Plain. The Pedersons sincerely appreciate all the caretakers (angels) at these facilities and their dedication in providing our mother with very professional care and treating her with dignity. Irene will be fondly remembered by the many friends that she made at these facilities. She truly strived to go through life living one of her favorite Bible verses, John 15:13 "Greater love has no one than this, that he lay down his life for his friends."
Irene is survived by her children, Robert (Dorothy) Pederson of Miltona, Barbara (Harold) King of Rockford, IL, Gary Pederson of Bandon, OR, Douglas (Liz) Pederson of Minneapolis, Thomas Pederson of Prior Lake; 11 grandchildren; 11 great grandchildren and 2 great, great grandchildren; a sister, Iola Mooney of Dearborn, MI; many nieces and nephews.
She is preceded in death by her parents, her husband, Marv; sisters, Alice, Josephine and Mary and two brothers, Richard & Roger.
Memorials in her honor are preferred to the State Services for the Blind.

To order memorial trees or send flowers to the family in memory of Irene Pederson, please visit our flower store.