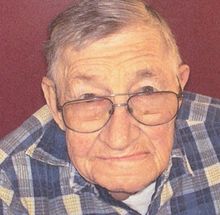 Life History for Jim Aurzada
James Aurzada, age 88 of Osakis passed away on Saturday evening, Dec. 17 at the Long Prairie Nursing Home in Long Prairie, MN.
James Nickolas Aurzada was born on November 28, 1923 in Ottertail County, near Wadena, MN to Edward and Rose (Lang) Auzada. After high school, Jim went to welding school in Duluth, MN. He was then drafted and served his country in the Army during WWII and was stationed in Korea. He returned home after his honorable discharge. Jim moved to the Osakis area in 1952 and spent many years farming east of Osakis until his retirement. On September 26, 1955 he was united in marriage to Margie Dohman at the St. Alexius Church in West Union, MN.
Jim is a former member of the St. Alexius Church in West Union and then joined the Immaculate Conception Church in Osakis, and was a member of the church choir. He was a former member of the Knights of Columbus and the St. Joseph Society. He was also a member of the Little Sauk Legion.
Some of his interests included working in his garden, going hunting and fishing and playing cards.
He is survived by his brother, Andrew (Helen) Aurzada of Pleasant, AZ; many nieces and nephews; three sisters-in-law, Bev (Pete) Asmus, Arlene Bakken, Erva Jenson and a brother-in-law, Vic Walter.
Jim is preceded in death by his parents, wife, Margie; three sisters, Agnes Aurzada, Sr. Ann Verena, Margaret Aurzada; three brothers, Carl, Isidore and Edward Aurzada.
A Mass of Resurrection will be held for Jim on Monday, December 26, 2011 at 11:00 am at the Immaculate Conception Catholic Church in Osakis with Fr. David Petron officiating. Interment will be at the Calvary Cemetery in Osakis with honorary pallbearers Tom & Carol Miller, Jim & Judy McArdell and John & Dorothy Sells. Active bearers are Pete, Dave and Chuck Thieschafer, Nick, Gabe and Alex Miller.

To order memorial trees or send flowers to the family in memory of James Aurzada, please visit our flower store.