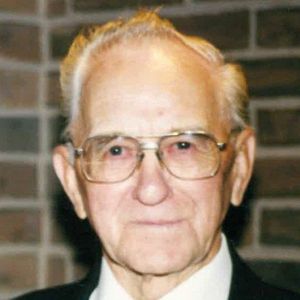 In 1915, Ray and Martha (Jensen) Ellis, along with their two young sons Meryle and Howard, rode the train from Osakis to San Francisco. Martha was with child, and stopped in Lewistown, Idaho to stay with her sister. On April 13, 1915, James (Jim) Frederick Ellis was born. The Ellis family returned to Osakis and purchased what is now known as the Berninghaus Farm, previously the Sorenson farm. Young Jim attended school at the Two Mile Schoolhouse near the family farm.
In about 1930, Jim drove his Aunt back to Fresno, California after her husband passed away while they were on a trip to Chicago. There he attended technical school, and upon graduation returned to Osakis with the Henning brothers, Bill and Carrol. There was very little work as it was the time of the Great Depression, and in 1935 Jim and the Hennings returned to California to look for work. Jim's Dad, Ray, loaned him $40 to make the trip via the Greyhound Bus. Arriving in California, Jim found a job as a surveyor with an oil company.
Jim made friends easily, and in 1938 he went on a blind date with Elizabeth Hogan. They were married February 5, 1939 in Las Vegas, Nevada and were married for 74 years, until Betty passed away at the age of 97 in 2013.
Visiting Minnesota in 1940, the young couple learned that Jim's Uncle John Jensen wanted to sell his farm located on Smith Lake. At the urging of Ray and Martha, they purchased the farm, and milked cows and raised turkeys during WWII. The farm adjoined Smith Lake, and the Jensens had a cottage there. Jim and Betty began renting boats to fishing people, and at the urging of friends, built cabins and opened Ellis Resort in 1955. They continued farming and operating the resort, living on the farm in the winter, and at the lake in the summer. In 1972 they sold the resort to George and Betty O'Neill and the resort was renamed Smith Lake Resort, which is still in operation today.
Even though they owned a resort, Jim was never much of a fishing person. It is telling that upon selling the resort, Jim bought a 3010 John Deere tractor, a John Deere plow, disk, and 494 corn planter. His first true love was Betty, but farming was a close runner up. Jim and Betty moved into assisted living at the Galeon in Osakis in 2005, but every day you could see Jim driving his old pickup truck out to the farm to feed his cats.
Jim will be remembered as a rather quiet, unassuming man with a hard work ethic, honest, a quick smile, and a good sense of judgment. Character was important to him, and it showed in his diverse group of friends that had one thing in common-good character. They weren't afraid to try something new. They could laugh at themselves, and each other. Jim will be missed.
Jim was a member of the Osakis Presbyterian Church. He also belonged to both the Osakis and Alexandria Resort Associations, and the Osakis Creamery Association.
Jim is survived by his two sons Tom Ellis (Eleanor Groby) of Wabasha, and Mike Ellis of Osakis; 6 grandsons, and numerous great grandchildren. He was preceded in death by his wife, Betty, his parents Ray and Martha (Jensen) Ellis; and his brothers Meryle, Howard, and LaForrest.
Services are Sunday, April 12, 2015 at 2:00 pm at the First Presbtyerian Church in Osakis with Pastor Tim Sutton, and organist Ellen Bangtson. Visitation begins at the church at 1:00 pm. Internment is at the Lakeside Cemetery in Osakis. Pallbearers are Jason Ellis, John Ellis, Mark Ellis, Michael Ellis, Jr., Ross Ellis, and Lynn Schultz. Honorary pallbearers are Merle Harth, Jim Jensen, and Jim Johnson. Arrangements by the Roy-Hetland Funeral Home, Osakis

To order memorial trees or send flowers to the family in memory of James Ellis, please visit our flower store.