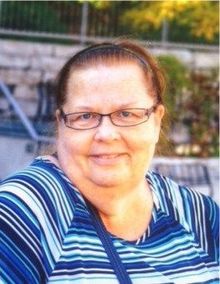 -- Jane Hanson, age 58 of Minneapolis, formerly of Osakis, passed into her new life on June 17, 2014 from her home in Minneapolis, MN. On February 21, 1956 a baby girl was born to Merle and Lois Ann (Vandewinkel) Hanson in Alexandria, MN. She was the middle daughter of three girls and they named her Jane Louise. Jane graduated from Osakis High School with the Class of 1974. After completing a program at the St. Cloud Technical College, Jane began a lifelong career in caring for those with special needs. Her first employment was at Willmar State Hospital in Willmar, MN.
Jane was a volunteer and member of Narcotics Anonymous for over 28 years. She considered them her extended family and mentored to many people through that organization. Helping addicts to find hope to rebuild their lives was her goal. Jane especially enjoyed traveling to the annual N.A. conventions and reconnecting with her many friends. Jane also liked making beautiful hand-crafted jewelry. Caring for and doting on her cat, Freddie was another priority for her.
Jane wanted to be remembered for her smile, her many acts of volunteering and assisting others in need (even if just to help them learn bus schedules or how to use the Internet.) She was the friendly face people could turn to for help.
Jane is survived by her two sisters, Judy (Herb) Henderson of Round Rock, TX and Joan (Terry) Goodwin of Carlos, MN; two nieces, Nicole and Kelsey Henderson and a nephew, George (Jenny) Henderson; a great niece, June Henderson; her aunts,Nona (Dave) Clark of Kerkhoven, MN, Paula Hanson, IN, Karyn Hanson, AZ and her furry companion, Freddie, the cat.
She is preceded in death by her parents, Merle and Lois Hanson.
Memorials preferred to the Animal Humane Society of Golden Valley, 845 Meadow Lane N , Golden Valley, MN 55422

A celebration of Jane's life will be held in Osakis on Saturday, June 28 at 2 pm at the Lillian Building,

To order memorial trees or send flowers to the family in memory of Jane Hanson, please visit our flower store.