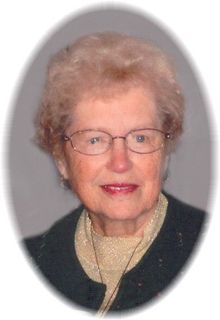 Life History for Jane Reinbold
Jane Reinbold, age 81 of Long Prairie, went to meet Jesus on Monday, January 27, 2014 from the Centra Care Hospital in Long Prairie, MN.
On September 24, 1932 a baby girl was born to Richard G. and Edna (Sadlemyer) Robinson in Iona Township, Todd County. They named her Letitia Jane and she grew up on the family farm and later graduated from Long Prairie High School with the Class of 1949. She attended the Little Falls Teachers College and returned to Todd County to teach in area country schools. When the country schools consolidated with the public school in Long Prairie, Jane continued working at the Long Prairie Elementary School as a teacher's aide for many years.
On December 19, 1951 Jane married Norman Reinbold at the First Baptist Church in Long Prairie. As a strong woman of faith, Jane remained an active member of First Baptist and served for many years as a Sunday School teacher an AWANA leader, on the ladies' aid, and as a kitchen helper. She also volunteered her time as a local election judge.
Some of Jane's hobbies included sewing, knitting and quilting. Jane also enjoyed gardening and watching and feeding the many birds at her birdfeeders. She was a wonderful hostess who always had the coffee pot on for company and kept her family and friends supplied with delicious home-made goodies, including canned goods from her garden. She also made time to play games (such as Scrabble) at home with her children and grandchildren. She was a very devoted wife, mother, grandma and sister who will be dearly missed by all who knew her.
Jane is survived by her husband of 62 years, Norman Reinbold of Long Prairie; 5 children, Bob (Susan) Reinbold of Henning, Paul (Fran) Reinbold of Long Prairie, Connie (Chuck) Sukola of Prior Lake, Joseph (Luanne) Reinbold of Long Prairie, Carolyn (Donnie) Middendorf of Long Prairie; 16 grandchildren; 13 great grandchildren; 6 honorary grandchildren; a brother, Robbie (Rosemary) Robinson of Long Prairie; 3 sisters, Joyce (Gil) Alverson of Sauk Centre, Cherry (Brad) Weishair of Sauk Centre, Mary Lynn Fisher of New Hope; many nieces and nephews.
Preceding her in death are her parents, two grandchildren, James and Andrew Reinbold; a daughter-in-law, Janice Reinbold; 2 sisters, Sandra McAninch and Edie Nelson.
Funeral services are on Friday, January 31, 2014 at the First Baptist Church in Long Prairie with Rev. Paul Twist and Rev. David Sobotka officiating. Musicians are organist, Diane Gustafson and soloist, Daniel Nelson. Interment is at the Evergreen Cemetery in Long Prairie with honorary pallbearers being all of her grandchildren. Active bearers include Reed, Matt, and Anthony Reinbold, Adam Hansen, Rich Alverson and Daniel Nelson.
Arrangements are with the Roy-Hetland Funeral Home in Osakis, MN.

To order memorial trees or send flowers to the family in memory of Jane Reinbold, please visit our flower store.