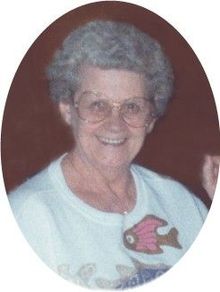 Life History for Janet Westlund
Janet Westlund, age 85 of Osakis passed away on Thursday, December 26, 2013 at the Community Memorial Home in Osakis, MN.
On October 5, 1928 a baby girl named Janet was born to Ilot & Bertha (Brendmoe) Erickson in Little Sauk Township, Todd County, MN. She graduated from the Osakis Public Schools. Janet first worked as a waitress at Osterberg's CafAC. and later as a teller at the Farmers 1st National Bank. On November 4, 1954 she was united in marriage to Marvin Westlund. They moved to California and Marvin served his country in the U.S. Navy. After returning to Minnesota they eventually built a hobby farm in Alexandria where they raised chickens, cows, pigs and horses. Janet also worked at the Knute Nelson Memorial Home. Later she worked as a cashier at the Plaza Liquor Store and as a bartender at Downtown Liquor. She retired in Alexandria and when poor health necessitated additional care, she became a resident at the Galeon campus in Osakis in 2008.
Janet was a member of the Alexandria VFW Auxiliary. She was both a card shark as well as an avid Bingo player and enjoyed taking trips to the area Casinos. She was a great cook and gardener and loved to follow the stock car races.
She is survived by her daughters, Lori (Kenneth) Mausolf of Miltona and Debbie (Michael) Sizemore of Clovis, NM; 4 grandchildren, Brian and Amy Sizemore, Joshua and Jaymee Senesac; 4 great grandchildren, Kamryn and Jackson Senesac, Wyatt Carlson and Riley Sizemore.
Preceding her in death are her parents, a son, Bradley Westlund and two brothers, Harold and Everett Erickson; a sister, Irene Curtis.
Funeral services will be held on Friday, January 3, 2014 at 11:00 am at the Roy-Hetland Funeral Home in Osakis with Rev. Kirk Lee officiating. Interment is at the Kinkead Cemetery in Alexandria. Visitation begins at 10 am at the funeral home on Friday morning.
Arrangements with Roy-Hetland Funeral Home, Osakis, MN

To order memorial trees or send flowers to the family in memory of Janet Westlund, please visit our flower store.