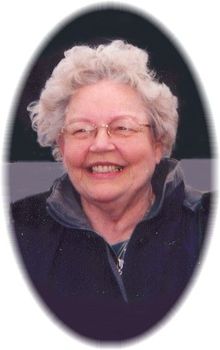 Life History for Janice Withers
Janice Withers, age 75 of Osakis, passed away on November 26, 2010 at the St. Cloud Hospital in St. Cloud surrounded by family.
Janice Ann was born on October 2, 1935, the daughter of Frank and Rose McClellan on the family farm in Hudson Township. Rose died just three weeks after Janice was born, so she was cared for by her grandmother. At the age of two she was adopted by Ralph and Bernie Clarno of Alexandria. She graduated from Central High in Alexandria with the class of 1954. One of her first jobs was working as a car-hop at the newly opened A & W Restaurant in Alexandria. On September 7 of 1954, Janice married James Withers in Port Smith, VA, while he was on assignment with the United States Army, whom she had met square-dancing at the Gene's Barn dance hall.
Besides raising five children, Janice worked at the American Launders for several years and also as a nursing aide at the Community Memorial Home in Osakis. In addition, she kept the books for the family manufacturing business in Osakis. She was a member of the First Presbyterian Church and served as a deacon. She also belonged to the Western MN Steam Threshers Reunion club and Albany Pioneer Days.
Some of Janice's interests included knitting and crocheting projects to give to her family and friends. She also liked to play piano and organ, read books and do crossword puzzles. Gardening, especially her flowers, kept her busy during the summer months. She was an excellent cook and loved to have her grandchildren around her to spoil. She was a kind and loving wife, mother, grandmother and sister who will be dearly missed by her family and friends.
She is survived by her husband of 56 years, Jim Withers of Osakis; children Jeff (Sherry) Withers of Fargo, Lynn (Tom) Chouanard of Nelson, Sue (Stan) Anderson of Little Falls, Keven (Eva Silk) Withers of Osakis, Jody (Diana) Withers of Minnetonka; 12 grandchildren; 6 great-grandchildren; 4 step-grandchildren & 6 step-great-grandchildren; sisters Audrey Thompson of Othello, WA, Marceline (Allen) Peterson of Three Hills, Alberta, Canada, sister-in-law Joan Clarno of Minnetonka & sister-in-law Marilyn Withers (Ruben) Bjorkman of Warroad; several nieces and nephews.
Preceding her in death are her birth parents, her adopted parents, brothers Vernon McClellan, Warren Clarno and half-brother Gerald McClellan; sister Rosemary Wilken and an infant sister.
Funeral services were held for Janice on Friday, December 3, 2010 at 11:00 am at the First Presbyterian Church in Osakis with Rev. Tim Sutton officiating. Musicians were Lynn Olson as organist and soloist, Dana Hetland. Internment was at the West Evergreen Cemetery in Osakis with honorary pallbearers Joshua, Rachel and Luke Withers, and all of her great grandchildren. Active bearers were Ashley and Jeremy Withers; Jessie, Eric, Elizabeth, Andrea Chouanard, and Kristin Anderson; Scott and Brittany Anderson.

To order memorial trees or send flowers to the family in memory of Janice Withers, please visit our flower store.