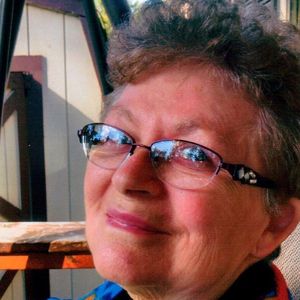 Elsie 'Janie' Camp, age 75 of Osakis, formerly of Crookston, MN and Peoria, IL passed into her new life early Thursday, October 27, 2016 from her home in Osakis, MN.
Janie was born on January 4, 1941 in Marshalltown, IA to Harl and Opal (Keeler) Gamber. She moved with her family to Peoria, IL and graduated from East Peoria High School. She married Clarence Strand and they traveled all around the United States, eventually settling in Crookston, MN to raise their family. Janie worked for many years as a Nurse's Aide at the Mount Nursing Home, which was a retirement home for elderly Catholic priests and nuns. After Clarence's death in 1990, Janie moved to be near her sister in Illinois. Soon she fell in love with William Camp and they married in 1991. They moved to the Osakis area in 1994 and enjoyed living by Lake Osakis. Janie was a member of the First Presbyterian Church and sang in the church choir. She also enjoyed outings with her Red Hat friends and cheering for her beloved Chicago Cubs. As a lifelong Cubs fan, she thoroughly enjoyed being able to watching them win this year's pennant race.
Janie was very methodical in all she did and diligently worked on many family albums. She also used that patience and calm manner while creating beautiful sewing or embroidery projects. She was very kind and loving, always willing to serve others and taught those traits to the many grandchildren and great grandchildren she so enjoyed. In addition, Janie shared this love with her darling little Dachshund named Stormie.
Janie was loved by all and her smile and grace will be dearly missed and long remembered.
She is survived by her husband, William Camp of Osakis; children, Wesley (Marilyn) Crombie of Council Bluffs, IA, Beatrice (Jim) Frantz of Wheatland, CA, Opal (Tim) King of Deer Creek, MN and William (Shawna) Strand of Pleasant Valley, UT; 11 grandchildren; 17 great grandchildren; siblings, Kittie (Philip) Kelley of Casa Grande, AZ, Shirley (Bill) Phelpls of Washington, IL, Tom Bair of Black River, NY; sister-in-law, Marcie Gamber of Washington, IL and brother-in-law, Robert Aho of Crookston, MN.
Preceding her in death are her parents, a grandson, William Strand; two brothers, Harl Gamber and David Bair, sister, Karen Aho.
A private interment will be held at Gordon-Pleasant Hill Cemetery in rural Osakis, MN.
Memorial preferred to the American Heart Association.
Arrangements provided by Roy-Hetland Funeral Home in Osakis, MN

To order memorial trees or send flowers to the family in memory of Janie Camp, please visit our flower store.