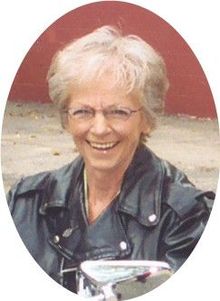 Jean Weiss, age 68 of Alexandria passed away surrounded by family on Tuesday, June 21, 2011 from her home in Alexandria.
Jean Marie Irwin was born on May 23, 1943 in Long Prairie, MN to Howard and Geraldine (Dowell) Irwin. She graduated from Long Prairie High School in 1961 and then went to work in Minneapolis for Control Data Corporation in their Research and Development laboratory. It was here that she met the love of her life, Dennis Weiss. They were married on April 6, 1974. When they moved to the Alexandria area in 1986, Jean found work as a manager at Douglas Machines.
Jean was a member of the Leslie Community Church in Osakis.
Some of her hobbies and interests included traveling, snowmobiling, playing cribbage and wintering in Florida. She was an excellent cook, especially known for her famous Fourth of July chicken feed. She loved being near the water and was a member of the Latoka Lake Association in Alexandria.
Surviving Jean are her children, Bill (Crystal Irwin) Weiss of Sturgis, SD, Dennis 'Dean' (Toni) Weiss of Buffalo, Bob Weiss of Sheridan, WY and Judy Tebben; 12 grandchildren; 4 great, grandchildren; her mother, Geraldine Irwin of Long Prairie; a brother, James (Lorie) Irwin of Elk River and a sister, Judy Lunceford of Long Prairie; 2 sisters-in-law, Kristi Irwin and Marilyn (John) McKay; many nieces and nephews.
She is preceded in death by her father, her husband, Dennis in 2006, a grandson, Brandon Weiss and a daughter, Darla Larsen; brother, John Irwin and brother-in-law, Wayne Lunceford.
Funeral services were held on Saturday, June 25, 2011 at 10:30 am at the Leslie Community Church in rural Osakis with Rev. James Brown officiating. Interment is at the Gordon Pleasant Hill Cemetery in Osakis with casketbearers Stan Berschett, Gary Lund, Michael and Steven Irwin, Mike Ruud and Dave Merdan.

To order memorial trees or send flowers to the family in memory of Jean Weiss, please visit our flower store.