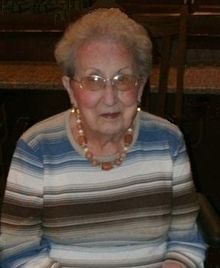 Jennie Treiber, age 95, won her battle and finally got to go home on August 1, 2013. Memorial services will be on Friday, August 23 at 10:30 a.m. at Immaculate Conception Church in Sioux City, Father Armand Bertrand officiating. Burial will follow at Calvary Cemetery. There will be a short visitation at 9:30 a.m. at the church prior to services. Arrangements are with Roy-Hetland Funeral Home ( www.royhetland.com ), Osakis, Minnesota, and Christy-Smith Funeral Homes ( www.christysmith.com ), Sioux City, Iowa.

Jennie was born on January 10, 1918, in Sioux City, Iowa, to parents, Henry and Alexandria (Golub) Wanda, both immigrants from Russia. She attended Sioux City Public Schools and went on to beauty school. Jennie married Maurice 'Toad' Treiber on February 6, 1941, in Danbury, Iowa, and they raised five daughters. After they moved to Sioux City in 1960, Jennie worked outside of the home and ultimately retired from Bottenfield's Beauty Supply, where she was store manager. The Treibers spent their retirement years in Alamo, Texas. Toad died in 2001 and, in 2006, Jennie moved to Minnesota to be near her family.

Jennie was a special lady who will be missed by many. She sustained her grace and wit throughout the years. In lieu of flowers, please make a donation today to your favorite cause or charity in Jennie's memory. Mom, you will always be loved and remembered. Off and running at Atokad!


To order memorial trees or send flowers to the family in memory of Jennie Treiber, please visit our flower store.