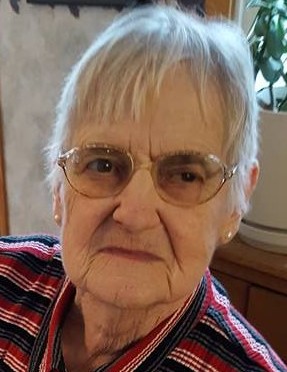 LIFE HISTORY for JOAN POLLARD
Joan Pollard, age 83 of Osakis entered into her new life early Saturday, June 6, 2020 from the Galeon in Osakis, MN.
Joan Marie Bodanski was born to Frank and Christina (Haefner) Bodanski in Osakis, MN on July 18, 1936. She married Carroll Chapman on September 12,1953. They dairy farmed and Carroll also owned and operated a trucking business. Joan helped with the farm chores, milked cows, did the bookkeeping for the trucking business while also raising four children. Her favorite vacation was a trip to Hawaii and what she most fondly remembered the rest of her life. She was a member of the First Presbyterian Church and belonged to the Ladies Aide.  She was also active in the Osakis VFW Post 7902 Auxiliary and even found time to teach and paint ceramics. Due to a hereditary eye disease, Joan lost most of her vision. She was legally blind for many years but she didn’t let it slow her down. On June 15, 1985, Joan married Donald Pollard. They enjoyed their years together by going dancing, taking long walks and playing cards with friends and neighbors. Joan enjoyed listening to many Books on Tape and dearly loved her Pomerainian dogs, Bootie,  Little Red and Foxy. They were her constant companions. After Don’s death in 2012, Joan was proud to be able to care for herself and maintain her home in Osakis. She looked forward to the visits from family, friends and her many grandchildren.
Joan is survived by her children, Steve Chapman of Polson, MT, Sharon Drum of Long Prairie, and Julie Chapman (Joy Gibbon) of Chesapeake, VA; 11 grandchildren; 31 great grandchildren; her sister, Dorothy Adensam of Osakis; several nieces and nephews. Preceding her in death were her parents; husband, Donald; daughter, Connie Martin; 3 brothers, George, Edward, and Walter Bodanski and a sister, Helen Bodanski.
A family graveside service will be held on Monday, June 8, 2020 at 3 pm at E. Evergreen Cemetery with a Celebration of Life to be held at a later date. Condolences and memories may be left for Joan on her Tribute Wall at www.royhetland.com. Arrangements are being handled by the Roy-Hetland Funeral Home, Osakis, MN.

To order memorial trees or send flowers to the family in memory of Joan Pollard, please visit our flower store.