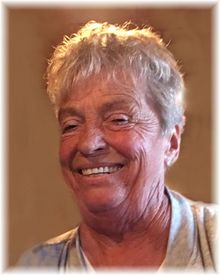 Joan Reed, age 75 of Osakis passed away on Tuesday, Dec. 13, 2016 at the St. Cloud Hospital in St. Cloud, MN. Funeral services will be held on Wednesday, Dec. 21 at 2:00 pm at the New Life Christian Church in Alexandria, MN. Visitation hours are from 4 - 7 pm on Tuesday evening at the Roy-Hetland Funeral Home in Osakis and also on Wednesday one hour before the service at the church.
Joan Alma Gerdes was born on May 11, 1941 to Lammert "Bert" and Alma (Teichert) Gerdes in Raymond, MN. She was one of seven children. She graduated from Clara City High School in 1959. She married Ronald Kimpling on April 29, 1960 in Clara City. The couple lived in Clara City until 1965 when they moved to Sacred Heart. In addition to raising her three sons, Joan worked various jobs in the Clara City / Sacred Heart / Renville areas. On March 20, 1987, Joan married Gene Reed in Willmar, MN. The couple moved to Gene's family farm near Osakis, MN. Joan worked as a cook and waitress at area restaurants, then for seven years as the manager for the Glenwood Senior Center and for the last three years had been employed at the Central Lakes Restaurant Supply in Alexandria. Joan was a people person who enjoyed working with the public. Joan had a great singing voice and enjoyed listening to music, especially if it was classic country western. She would listen to it while she sat at her sewing machine making blankets, pillowcases or special pajama sets for her grandkids. Joan was an excellent cook, well known for her homemade bread and world-famous potato salad. She liked to be outdoors and never minded soaking up the sun while mowing the lawn or tending her garden. When harvest time came, she worked hours making many quarts of canned goods to share with neighbors, family, and friends. She loved watching the birds that would come to her feeders. When she finally had time to sit down to watch some TV, it would be to watch the Nascar races with Gene.
Joan lived life to the fullest and was proudly independent. She will be dearly missed by her family and many friends.
She is survived by her husband, Gene Reed of Osakis; sons, Sheldon (Connie) Kimpling of Marshall, MN, Scott (Dena) Kimpling and Mike (Kelly) Kimpling, all of Norwood, MN; step-daughter, Beckie (Rick Quill) Holt of Baxter, MN and stepson, Ross (Tami Naslund) Reed of Little Falls; 13 grandchildren; 10 great grandchildren; her siblings, Betty (James) Heuer of Osakis, Ronnie (Dorothy) Gerdes of Cross Lake, Arlette (John) Rubertus of McKinney, TX, Don (Deanna) Gerdes of Sioux Falls, SD, Galen (Ardis) Gerdes of Clara City, MN and Jim (Darlene) Gerdes of Willmar, MN; many nieces and nephews.
Preceding her in death are her parents and a niece, Melanie Gerdes and a nephew, Tom Cummens.
Funeral services for Joan will be held on Wednesday, December 21, 2016 at 2:00 pm at the New Life Christian Church in Alexandria with Pastor John Taplin officiating. Musicians are Sue Ronning and Kevin Gerdes. Honorary pallbearers are her granddaughters, Jessica Kimpling, Alyssa Schilling, Amber Kimpling, Megan and Miranda Reed. Active bearers are grandsons, Justin, Jared and Blake Kimpling, Jared and Jamie Holt, Mitch Reed.
Arrangements provided by Roy-Hetland Funeral Home in Osakis, MN

To order memorial trees or send flowers to the family in memory of Joan Reed, please visit our flower store.