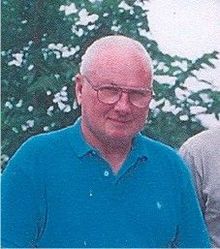 Life History for John Markey, Jr.
John Markey, Jr., age 71 of Villard, MN passed away on Monday, Nov. 1, 2010 at the Knute-Nelson Memorial Home in Alexandria, MN.
John James Markey, Jr. was born on October 5, 1939 in Omaha, NE to John and Edith (Castle) Markey, Sr. He lived and attended school in Omaha, graduating in 1958 from Holy Name High School. He was a member of the '57 and '58 State Championship basketball teams. John began his career as a car mechanic at Huitt Auto Service in Omaha, and while working there he met and fell in love with Nancy Huitt. On August 12, 1961 John and Nancy were married in Omaha, NE. He then went to work at the Wilson & Co. Meat Packing Plant, first in Omaha, then Cherokee, IA and finally in Kansas City, KS. In 1975 the family moved to Windom, MN where John was employed by the Caldwell Packing Co and later BSI of Windom. After sixteen years in Windom, they moved to Marshall, MN and John began working for Carlson-Stewart Refrigeration. In 1992, John and Nancy moved one more time to a home on Lake Leven, near Villard, MN. John continued to commute to work in Marshall for another 13 years before retiring in 2005.
Fishing and hunting were the pastimes John enjoyed the most. He also liked to bird watch and travel around the Midwest to his favorite hunting and fishing spots. He was a proud grandpa who loved watching his grandkids in any event they chose to participate. He was a hardworking husband, father, grandpa and brother who will be dearly missed by his family and friends. We rejoice in knowing he can now see and hear us clearly again.
John is survived by his wife, Nancy of Villard; four children, Mark (Teresa Poe) of Detroit Lakes, MN, Jim (Lisa) of Sartell, MN, Mike (Sue) of Grand Rapids, MN, Dianne (Ron) Majerus of Osakis, MN; seven grandchildren, Heather, Andrew, Jonathon, Jordan, Gretchen, Kassie and Callan; a brother, William (Karla) Markey of Loveland, CO and a sister, Barbara (Pat) Bostwick of Altoona, IA; and eight grand puppies. John is preceded in death by his parents.
A public visitation was held on Thursday, Nov. 4 from 4 - 8 pm at the Roy-Hetland Funeral Chapel in Osakis and a family service was held on Friday, Nov. 5 with Rev. Al Bolte as celebrant. Music was provided by two of his grandchildren, Gretchen and Jonathon. Interment was at the Lake Leven Cemetery in Villard with honorary bearers being his grandchildren and pallbearers being his children. A lunch was provided by the ladies of the United Methodist Church of Villard, MN.

To order memorial trees or send flowers to the family in memory of John Markey, please visit our flower store.