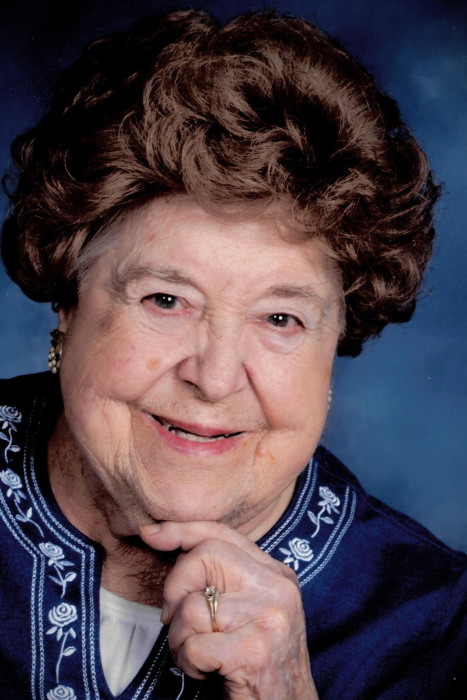 Joyce Engstrand, age 91 of Osakis went to meet her Savior early Friday, July 27, 2018 from the Knute-Nelson Home in Alexandria, MN.

Joyce Alene Jensen was born on April 8, 1927 in Minneapolis, MN to Oscar and Louise (Peterson) Jensen.  She was a graduate of Roosevelt High School in 1945.  She was united in marriage on October 15, 1949 in Minneapolis to Lawrence Engstrand.  In 1956, the Engstrand’s purchased the Osakis Cleaners dry cleaning business.  They moved their family to Osakis and became very active in various civic organizations, such as the Lions and the Chamber of Commerce.  They became members of the Osakis Lutheran Church, where Joyce joined the choir and helped with the Ladies Aide.  Joyce was politically active and also served on the Douglas County Fair Board for many years.  In 1971, Joyce was hired as a bookkeeper for Alex Electric in Alexandria and worked there until her retirement in 1994.  She continued to live in their home on Nokomis Street in Osakis for several years after Larry’s death in 1990, eventually moving to assisted living apartments, first in Osakis and then in Alexandria at Nelson Gables and Edgewood Vista.

Some of Joyce’s interests included cooking and canning.  She loved to garden and enjoyed sharing the fresh produce with friends and family.  She belonged to a quilting group and liked to sing, play piano, go dancing and play Bingo.  She also was a league bowler.  Joyce loved to cheer for her favorite sporting teams on television or watch Wheel of Fortune. Spoiling her grandchildren was probably her favorite activity.  Joyce had a big heart and a love for people.  She shared her talents with others and was willing to volunteer her time to serve a greater good.  She was a kind and loving mother, grandma and great grandma who will be dearly missed by her family and friends.

She is preceded in death by her parents, husband Lawrence, son-in-law Edward Hooper, grandson Bobby Hooper and brother Ronald Jensen.

Funeral services for Joyce will be held at the Osakis Lutheran Church on Wednesday, August 1, 2018 at 11:00 am with visitation one hour before the service. Rev. Rich Fitzer officiating. Organist is Pat Converse.  Interment will be at the Spruce Hill Cemetery in rural Douglas Co. with her great grandchildren serving as honorary pallbearers.  Active bearers are Sarah Buron, Jon & Justin Engstrand, David Hooper, Laurie and Scot Olson.

To order memorial trees or send flowers to the family in memory of Joyce Engstrand, please visit our flower store.