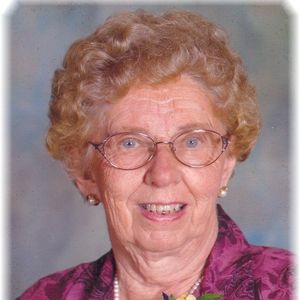 Life History for Jueanetta 'Jen' Sibell
Jueanetta Sibell, age92 of Osakis passed away peacefully after a short illness on Sunday evening, Dec. 22, 2013 at the Bethany Home in Alexandria, MN.
Jen was born on May 17, 1921 on the family farm in Nobles County near Wilmont, MN. She was the first daughter born to Joseph and Veronica (Mensen) Hoffman. On July 9, 1943 Jen was united in marriage to Arthur L. Sibell at the Ft. Snelling Chapel in Minneapolis, MN. After a few years in the Osakis area, they moved to St. Paul. Jen worked at The Driftwood Room in the Hotel Lowry. When the Sibell's bought the Evergreen Inn Resort in Miltona, MN, in addition to caring for her family and the resort patrons, the Sibell's also were foster parents for Douglas County children. When they sold the resort and moved to a home in Osakis in 1977, Jen quickly became involved the Osakis community and began working as the Site Director for the Senior Dining Center. She helped start the Meals on Wheels program for Osakis.
Because of her caring nature, Jen was involved in many volunteer activities. She was a member of the Osakis V.F.W. Auxiliary, having served as past president. She was also a member of the Osakis Senior Citizens club and the Douglas Co. Committee of Aging. Jen was a very active member of the Immaculate Conception Church and was the chairperson for the annual Summer Festival dinners for many years. She belonged to the Daughters of Isabella and served as Regent, receiving the Member of the Year Award for the State of MN. She also belonged to the Christian Mothers Confraternity.
Jen was an excellent cook, baker and crafter, golfer, dancer and at Christmas time would gather with her grandchildren to make and decorate over 100 dozen cookies. She enjoyed opening her home and heart to all family members and friends. She truly was 'her brother's keeper.'
Jen is survived by her children, Joyce (Ronald) Watson of Glenwood, John (Bonnie) Sibell of Dayton, Mary (Gregory) Schmidt of Miltona and Julie (Greg) VanKempen of Brighton, CO; 15 grandchildren; 27great grandchildren; 2 great, great grandchildren; a brother, Robert (Shirley) Hoffman of Elbert, CO; two sisters, Marie Dorr of Reno, NV and Joann Klingenberg of St. Paul; sisters-in-law, Margaret Kallstrom, harriet Sibell, Donna Myers; brothers-in-law, Marlin (Dorothy Sibell, Gary (Linda) Sibell; many nieces, nephews and cousins..
She is preceded in death by her parents, her husband, Art in 1993; a granddaughter, Jennifer Watson and her brothers, Arthur, John, Donald and Clarence Hoffman.

A Mass of Resurrection was held for Jen on Friday, Dec. 27, 2013 at 10:30 am at the Immaculate Conception Catholic Church in Osakis with Fr. David Petron officiating. Interment is at the Calvary Cemetery in Osakis, MN with honorary pallbearers being the members of the Osakis V.F.W. Auxiliary, the Osakis Senior Citizens Club, the Daughters of Isabella and the Christian Mothers. Active pallbearers are her grandchildren.

To order memorial trees or send flowers to the family in memory of Jueanetta Sibell, please visit our flower store.