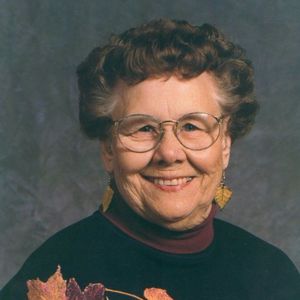 Karna Lorraine Krick, age 90, died Wednesday, November 26, 2014 at her home in Alexandria, MN surrounded by her family. Karna was born August 29, 1924 at home on a farm near Round Lake, MN to Nate and Gertrude (Galema) Freshour. As she grew she followed her dad wherever he went. She attended all eight grades of School District 44 in Nobles County, MN.

Karna was united in marriage to Norbert Anthony Krick on February 15, 1943 in Slayton, MN during a military furlough. Norbert died on October 31, 2003.

She learned the art of homemaking from her mother, which she would use as they farmed around Worthington and Avoca, MN. In 1956 they moved to the Krick family farm at Avoca, MN.

She was expedient with getting meals on the table at a specified time of the day, forgetting nothing. She collected boxes of recipes. She was a seamstress and later learned to crochet which brought her much joy. For entertainment she and Norbert would attend dances in the surrounding area and play cards with friends and family. She also loved to go to the casinos and bingo. After moving to Alexandria, MN she continued her bingo playing and started walking. At age 78 she was given a computer which she learned to use and continued to use up until about two weeks before her death.

She was preceded in death by her husband, parents, brothers and sister, Derrill and Dillen Freshour and Gloria Lou Rima; her daughter-in-law, Sheryl (Crowley) Krick; and grandsons, Todd Anthony Krick and Timothy James March.

Karna will be laid to rest at Restland Memorial Gardens in Slayton, MN.

To order memorial trees or send flowers to the family in memory of Karna Krick, please visit our flower store.