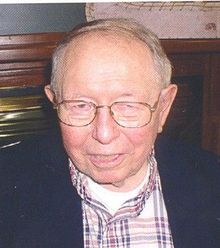 Life History for Kenneth J. Brouns
On May 16, 1924 a baby boy was born to Louis and Helena (Michels) Brouns at their farm home in Belle River Township, Douglas County. They named him Kenneth John. He attended Osakis High School and graduated with the class of 1941. Ken returned to work on the family farm which was already a Brouns Family Century Farm. On September 24, 1946 he was united in marriage to Marie Steidl at St. Nicholas Catholic Church in Belle River, MN. They did dairy farming and crop farming for many years. His son, Tom continues in his father's footsteps and works the land and lives on the family farm. Ken was also well known for operating the Brouns Tax Service in Osakis which he purchased in 1963. Ken continued to use his sharp mind and accounting skills well into his senior years, even doing some tax work as a resident at CMH. His grandson, David Brouns took over the business in 2009. After a farm accident in which Ken lost his right hand, he learned to write and work with his left hand and amazed people with his determination to make the best of his disability.
Ken was a lifetime member of the Immaculate Conception parish in Osakis and served on both the church board and the St. Agnes School Board. He was also a member of the Knights of Columbus.
For over twenty years Kenny wintered for a month in Mesa, Arizona and enjoyed traveling throughout the country. In his

younger days he liked to go bowling and was on both a mixed-doubles and men's league. He loved music and enjoyed singing and dancing. He could play both lead and steel guitar. Family gatherings and visiting with clients were also things he enjoyed. Kenny also liked to get together for neighborhood card parties. He was a hard worker and a faithful father, grandpa and brother who will be dearly remembered by all who knew him.
He is survived by his children, Thomas (Karen) Brouns of Osakis, Debra (Keith) Anderson of Osakis and James (Beth) Brouns of Rice; 12 grandchildren; 12 great grandchildren; a sister, Gloria (Harold) Maus of Osakis; many nieces and nephews.
Preceding him in death are his parents; his wife, Marie (in 2003); an infant grandson, Stevie Schlosser; his brother, Joseph Brouns and an infant brother; two sisters, Marie Collins and Rosie Schneiderhan and two infant sisters.
Kenny passed away Sept. 14, 2012 at the Community Memorial Home in Osakis, MN. A Mass of Resurrection was held on Wednesday, Sept. 19, 2012 at 10:30 am at the Immaculate Conception church in Osakis with Fr. David Petron officiating. Interment is at the Calvary Cemetery, Osakis, MN with the pallbearers being his grandsons, David and Cory Brouns, Ryan, Cody, Adam and Chad Schlosser.

To order memorial trees or send flowers to the family in memory of Kenneth Brouns, please visit our flower store.