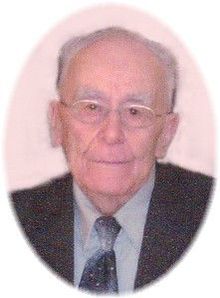 Life History for Kenny Simpson
Kenny Simpson, age 99 of Osakis and formerly of Alexandria, passed away on Sunday evening, March 23, 2014 at the Centra Care Nursing Home in Long Prairie, MN.
On July 12, 1914 a son was born to George and Mary (Bates) Simpson in Fulton, Illinois. They named him William Kenneth Simpson. He moved as a young man to central Minnesota and on October 24, 1941 Kenny was married to his sweet heart, Myrtle Leona Wegener in Bertha, MN. They would farm together for over fifty years on a farm located in Leslie Township, Todd County, MN. They dairy farmed and also raised top market veal calves. Two years before Myrtle's death in 1995, they retired and moved to Alexandria, MN. Ken lived at Bethel Manor Apartments for over twenty years and faithfully volunteered his time to help others. For fifteen years he helped in the coffee shop with his longtime friend, Earl Olson and also assisted other residents by taking them to meals, chapel services or other activities.
Throughout his life, Ken lived by the motto that "whatever you are given to do, do it well" and that was truly his guide. He enjoyed country living and farming with horses. He was a member and former elder for the Leslie Presbyterian Church and later belonged to the First Presbyterian Church in Osakis. Ken loved his family and spending time with them. He also loved chocolate milk, pumpkin pie and root beer! Going out for a meal was a treat as was taking a drive out in the country to see the fields and wildlife. He was a kind and caring father and grandpa who will be dearly missed. Special thanks to his caregivers, Laurie Dykema, Scott Lyman and Diane Leismeyer.
Kenny is survived by his children, Judith Melin of Mt. Juliet, TN, Wallace (Judy) Simpson of Osakis, Freddie (Shelby) Simpson of Smith Grove, KY, Lee (Vicki) Simpson of Long Prairie, Edna (Scott) Johnson of Miltona and Mary (Jerry) Dingmann of St. Joseph, MN; 12 grandchildren; 18 great grandchildren and 3 great great grandchildren.
He is preceded in death by his wife, Myrtle; a grandson, Kevin Simpson and a great great grandson, Caidyn Melin.
Funeral services for Kenny were held on Thursday, March 27, 2013 at 11:00 am at the First Presbyterian Church in Osakis with Rev. Tim Sutton officiating. A special reading was given by Dave Olson. Musicians were organist, Vicki Hinrichs and soloist Dana Hetland. Interment was at the Gordon Pleasant Hill Cemetery in rural Osakis, MN with his eight grandsons as casketbearers, Troy and Russ Melin, Darrin Simpson, Trevor and Travis Simpson, Dustin Johnson, Michael and Matthew Honer.
Arrangements by the Roy-Hetland Funeral Home in Osakis, MN.
CLICK HERE TO VIEW VIDEO TRIBUTE

To order memorial trees or send flowers to the family in memory of Kenny Simpson, please visit our flower store.