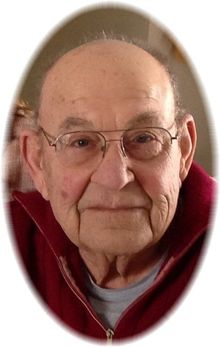 LIFE HISTORY FOR LADDIE HAWKINS
Laddie Hawkins, age 82 of Osakis went to meet his Lord on September 24, 2014 from his home in Osakis surrounded by his family.
On New Year's Day, January 1, 1932, a baby boy was born to Cloyde 'Claude' and Ruth (Afflerbaugh) Hawkins in Osakis Township, Douglas County, MN. They named him Laddie Ordean and he was one of eight children born to this union. He grew up and graduated from Osakis High School with the Class of 1950. Laddie served his country in the U S Air Force during the Korean War and after his honorable discharge returned to marry the love of his life, Marlys Torstenson on March 2, 1956 in Nashua, Iowa. They moved to Brooklyn Park where Laddie worked as a utility electrician for Nothern States Power Company. He was a member of the AFL-CIO local union 160 and worked for NSP for 34 years before his retirement. After building a home and moving to Osakis in 1996, they then moved to Remer for several years in 2000, returning to Osakis in the last few years.
Laddie was a life time member of the Osakis VFW Post #7902.
Because he loved nature and being outdoors, some of Ladd's favorite past times were his yearly fishing, hunting and snowmobiling trips. He also enjoyed traveling and made many friends while wintering in Texas each year. A natural repairman, Ladd's also kept busy just working on various projects around his home. He was a kind and loving husband, father, grandpa and brother who will be dearly missed by his family and many friends.
Left to mourn his passing is his wife of 57 years, Marlys Hawkins of Osakis; children, Joni (Russell) Hoosline of Montana City, MT, Karen (Todd) Blair of Andover, Douglas Hawkins of Blaine, Gail (Tom) Severson of Remer, MN; 9 grandchildren; 4 great grandchildren; one brother, Richard Hawkins, Sr. of Osakis; two sisters, Dorothy Hartmann of Osakis and Gladys Campbell of Hemet, CA; many nieces and nephews.
He is preceded by his parents and four brothers, Glenn, Roger, Donald and MaxHawkins.
A Celebration of Life memorial service was held for Ladd on Sunday, Sept. 28, 2014 at 2:00 pm at the First Presbyterian Church in Osakis with Chad Schwanke presiding. Organist was Ellen Bangtson. A luncheon followed in the fellowship hall after the service.
Arrangements by the Roy-Hetland Funeral Home in Osakis, MN.

To order memorial trees or send flowers to the family in memory of Laddie Hawkins, please visit our flower store.