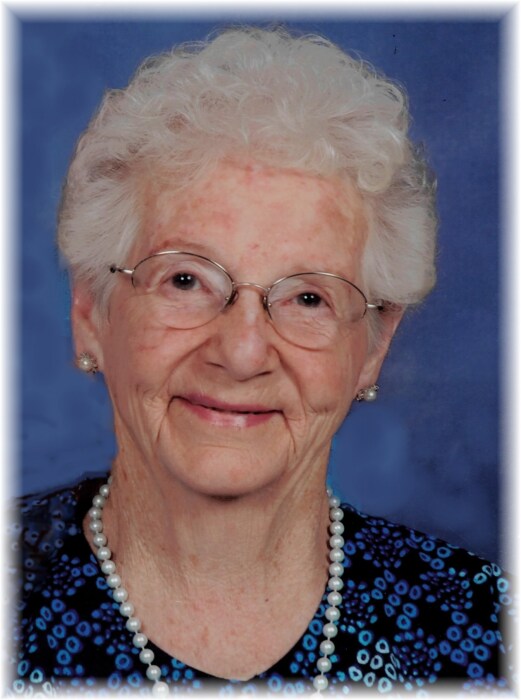 Surrounded by her children, Laurel Patricia “Pat” Mohror, 93, was reunited with her loved ones in heaven on June 29, 2020, from her home in Osakis, Minnesota. She was born February 9, 1927, the youngest child of John and Olga (Salley) Welsh and grew up during the Dust Bowl years on the family farm near Arlington, SD. From an early age, Pat showed a creative spark and zest for life that was demonstrated by her annual Shirley Temple impersonation, singing and dancing at her mother’s club meetings. She was a ham from toddlerhood!

Although not an avid farm girl (the chickens scared her), Pat loved the baby animals of the farm and often made pets of them. She remembered fondly a little lamb who followed her around the farmyard like a puppy and was her constant companion.

Pat attended the nearby one-room schoolhouse, being taught for a time by her sister Millie, before transitioning to Arlington High School. It was at this time that she began dating Clarence Junior (CJ) Mohror. Pat graduated in 1945, honored as her class’s “Representative Girl.”

While CJ served in the Occupation Army in Germany, Pat attended a year of college at South Dakota State University in Brookings. Then, because of the severe teacher shortage occasioned by WWII, Pat left college and took a short course to become one of the “Six-Week Wonders” qualified to teach in South Dakota’s rural schools. She taught all eight grades in the same tiny schoolhouse she had attended as a child.

When CJ returned from service, Pat and CJ were wed on June 5, 1947, at St. John the Baptist Church in Arlington. They made their first home in Arlington, where daughter Kathleen was born in 1949, then CJ’s employment took them to nearby Gary, SD, where son Kevin was born in 1956. Finally, in 1960, the family moved to Osakis, which became their new hometown and where their family was completed with daughter Keri in 1965.

Pat was a fun and loving mother, making birthdays and holidays extra special. Her flair for creative writing was seen in the prize-winning declamation speeches she wrote for Kathy and Kevin. When Keri started school, Pat began working at the First National Bank of Osakis, retiring in 1990 after 20 years. In retirement, Pat and CJ enjoyed traveling with Pat’s sister Millie and her husband Marvin for several years. After CJ’s death in 2003, Pat remained at home and active. She was a lifetime member of the VFW Auxiliary, where she was known for serving fish at the monthly fish fry for many years. She previously served on the board of the Osakis Heritage Society and was an active member of the Osakis Nursing Home Auxiliary until the time of her death.

Throughout her long life, Pat was sustained and inspired by her strong Catholic faith. She was proud to send all three of her children to St. Agnes parochial school, and as a member of Immaculate Conception parish in Osakis, she served on the pastoral council, as a lector and member of the choir. She was a longtime member of the Daughters of Isabella and Christian Mother organizations. Most recently, Pat was sending birthday cards to senior members of the parish on behalf of the stewardship committee and sewing and embroidering baptismal garments for newest members of the church. She took special satisfaction in helping prepare the altar for weekly Masses at the nursing home and helping lead the rosary for the residents.

Pat was famous for her homemade banana bread, doughnuts and grape and apple jellies, and her family could always count on an overabundance of delicious foods whenever they visited. Pat cherished her friends and family and lived life to the fullest to the last, often declaring, “Life is good!” and “Thank you, God.” She was a compassionate, generous, and loving woman who will be deeply missed by all who knew her.

Others of special importance to Pat were her nieces (the “Golden Girls”) and CJ’s siblings and extended family. She appreciated the dear friends who have been a comfort and support during her final illness. Finally, her “grandkitties,” Remington and Peep, will miss their afternoon naps on her lap.

A Mass of Resurrection open to the public will be held for Pat on Thursday, July 2, 2020 at 10:00 am at the Immaculate Conception Church in Osakis with Fr. David Petron officiating.  Interment is at the Calvary Cemetery in Osakis, MN with Joyce Klimek, Pat Pomerleau, Marilyn Grundman, Sandy Waldvogel and Eldora Finnegan as honorary pallbearers.  Active bearers are John Mohror, Amy, Gannon and Kristin Rieger and Noah Johnson.  A visitation will begin at the church at 9:00 am Thursday morning.  Condolences and memories may be left on her Tribute Wall at www.royhetland.com.  Arrangements are being handled by the Roy-Hetland Funeral Home, Osakis, MN.

To order memorial trees or send flowers to the family in memory of Laurel 'Pat' Mohror, please visit our flower store.