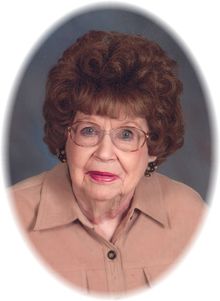 LaVerne Listberger, age 91 of Osakis passed over into her eternal life on Monday evening, May 10, 2010 at the Community Memorial Home in Osakis.
LaVerne Elaine Norbeck was born on December 27, 1918 in Minneapolis, MN to Arthur and Hannah (Jacobson) Norbeck. She grew up in Minneapolis and on July 11, 1938 she was united in marriage to Robert Listberger at the Church of the Holy Rosary in Minneapolis, MN. They lived in Richfield, MN and later Eden Prairie, moving permanently to their home on Lake Osakis in 1975. LaVerne was a wonderful wife and mother who kept busy feeding and caring for their nine children. She was a member of Immaculate Conception parish in Osakis, MN.
LaVerne is survived by her children, Dianne Connolly of Bloomington, MN, Martha Kay Barton and David (Lucille) Listberger, all of California, Cathy (Charles) Erickson of St. Michael, MN, Lorraine Listberger of Osakis, James (Iris) Listberger of California, Margaret Listberger of Bastrop, TX; 14 grandchildren; 18 great grandchildren; daughter-in-law, Judy Listberger of El Paso, TX; many nieces and nephews.
She is preceded in death by her parents, her husband, Robert Listberger, Sr. who died on July 26, 2000; a son, Robert, Jr. and a daughter, LaVay George; one sister, Lorraine Slettvedt.
A Mass of Resurrection will be held on Thursday morning at 11 am at the Immaculate Conception Catholic Church in Osakis with Fr. David Petron officiating. Music is by the church funeral choir. Interment is at Calvary Cemetery in Osakis with honorary pallbearers all of her grand and great grandchildren. Blessed be her memory.

To order memorial trees or send flowers to the family in memory of LaVerne Listberger, please visit our flower store.