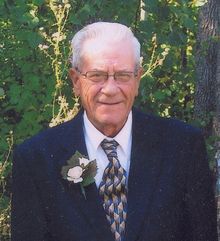 Life History for Leland Wilken
Leland Wilken, age 73 of Osakis passed away early Monday, March 11, 2013 at the Sheyenne Crossing Nursing Home in West Fargo, North Dakota.
Leland Gale Wilken was born on June 10, 1939 in Milaca, MN to Gale and Eleanor (Anfinson) Wilken. He was baptized into the Lutheran faith on January 30, 1941 in Milaca MN . As a young man, Leland was active in 4 -H clubs and continued his involvement all through his school years. He regularly received awards when showing his prize Guernsey heifers. Leland graduated from Princeton High School with the class of 1957 and went on to complete an education degree for Agriculture from the University of Minnesota in 1961. On July 31, 1965, Leland married his sweetheart, Janet Lea in Elk River, MN. They raised three children. For eight years, from 1956 to 1964, Leland served in the Minnesota National Guard and became trained as a marksman. He also began a 27 year teaching career with his first employment as a teacher at the Medford Public School. He then taught in Morris and Belgrade, MN before finally settling in Osakis, MN and teaching Ag classes there until his retirement. Leland was also involved as an F.F.A. Advisor and was also the Adult Ag Instructor.
Leland was a member of the Osakis Lutheran Church and the Osakis Lions Club, having served as past president. Some of his hobbies and interests included gardening, fishing, cutting wood and farming.
Leland is survived by his children, Daniel (Sherrie) Wilken of Villard, Susan Howard of Glenwood and Michelle (Nathan) Nyhammer of West Fargo, ND; 8 grandchildren; 10 great, grandchildren; his mother, Eleanor Berdahl of Princeton; a brother, Duane (Shirley) Wilken of Princeton; 2 brother-in-laws, Gary Lehr of Edina and Bill (Addie) Lea of Bismark, ND; several nieces and nephews.
He is preceded in death by his father, his wife, Janet in 2011; a son-in-law, Dan Howard; a sister, Eileen Lehr and a sister-in-law, Judith Lea.
Funeral services for Leland will be held on Friday, March 15, 2013 at 11:00 am at the Osakis Lutheran Church with Rev. Ron Calvert officiating. Musicians are organist, Pat Converse and soloists, Brook Wilken and Sarah Eblen. Inurnment is at Kinkaid Cemetery in Alexandria, MN. Honorary pall bearers are Jessica Kloos, Miranda Lorentz, Sarah Eblen and the members of the Osakis Lions Club. Active bearers are Mitchell and Christopher Nyhammer, Jacob Wilken, Brent and Terrace Holmgren and Lee Eblen.
Arrangements by the Roy-Hetland Funeral Home in Osakis, MN.

To order memorial trees or send flowers to the family in memory of Leland Wilken, please visit our flower store.