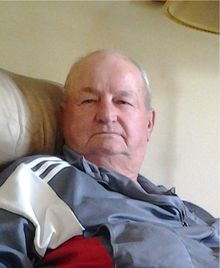 Leon Curtis, age 86 of Osakis entered the peace of Heaven on Sunday evening, November 9, 2014 from the Galeon in Osakis, MN where he was a resident.
On March 20, 1928 in Clay County near Moorhead, MN Andrew and Phena (Tucker) Curtis had a baby boy they named Leon Llewellyn Curtis. As a young child Leon moved with his family in 1934 to a new farm and home just south of Osakis, MN. He graduated from Osakis High School with the Class of 1946. On June 14, 1958 Leon married his long time sweetheart, Doris Reddick at the Osakis Lutheran Church after seven years of courtship and time serving his country in the U.S. Army from 1954 to 1956 when he was honorably discharged.
Leon spent his life dairy farming, and after many years of 'sweat-equity' had built up a premier dairy operation. He saw much change in farming during this time, first working the land with just horses until being able to farm it with four-wheel drive tractors. He also lived through the transition from cleaning barns and doing the twice a day milking by hand to the use of manure pumps and milk pipelines. Leon dairy and crop farmed until his retirement in 2000 when he could finally hang up his much loved striped bib overalls.
Leon was a member of the Osakis Lutheran Church and served on the church board. He was a man of faith and taught his children well. He would remind them often as they went out "Don't ruin my good name." He also belonged to the American Dairy Association, the Osakis VFW Post and served on the Osakis Creamery Board and the Gordon Hartford Insurance Board.
Besides his love of farming and working the land, Leon also enjoyed taking in area auction sales. He had a great sense of humor and liked to meet with his friends over coffee for conversation and news. He was a caring and loving husband, father and grandpa who will be dearly missed by his family.
He is survived by his loving wife of 56 years, Doris Curtis of Osakis; three children, Mike (Robin) Curtis of Osakis, Mary Curtis of Blaine, Nancy (Mike) Woidyla of Osakis; 4 grandchildren, Andrew (Vanessa) Curtis, Jaci Curtis, Curtis and Anna Woidyla; a brother, Keith Curtis of Stillwater; sisters, Beverly (Earl) Thompson of Albert Lea and Linda (Gary) Johnson of Paynesville; brothers and sisters-in-law, Lawrence Kloos, Jr. of Hoffman, Marlys (Robert) Ferris of Osakis, Donna Reddick of Ocala, FL, LoRita Curtis of Branson, MI, Tom (Sandy) Reddick of Evansville, MN; many nieces and nephews. He is preceded in death by his parents and a brother, Jim Curtis.
Memorials are preferred to the Douglas County Hospice or the Lions Diabetes Foundation of Minnesota.
Funeral services are being held on Wednesday, November 12, 2014 at 11:00 am at the Osakis Lutheran Church with Rev. Rich Fitzer and Associate in Ministry, Mindy Czycalla officiating. Musicians are organist, Pat Converse and soloist is Darlene Hendricks. Honorary bearers are the Osakis VFW Post #7902 Honor Guard. Active pallbearers are Craig, Brent and Bryce Curtis, Jim and Phil Kloos, Bruce Ferris. Interment is at the West Evergreen Cemetery in Osakis with military honors given by the Osakis VFW Honor Guard.

To order memorial trees or send flowers to the family in memory of Leon Curtis, please visit our flower store.