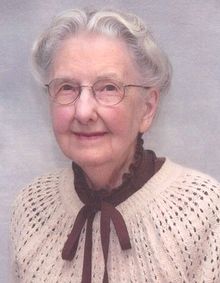 Life History for Leona Gordon
Leona Gordon, age 93 of Osakis, MN, passed away on Wednesday, March 21, 2012 at the Bethany Home in Alexandria, MN.
Leona Hanson was born on February 18, 1919 in Hannaford, North Dakota to Eddie and Selma (Pihlstrom) Hanson. She moved as a young girl to Minnesota and graduated from Wadena High School in 1937. After school, she moved to the Hibbing area seeking work. Eventually she made her way to Madison, WI and then to the Milwaukee area where she did accounting work until her retirement. In 1951 Leona was married to Henry Gordon in Milwaukee, WI. He passed away only five years later. At the age of 65, Leona moved to the Twin Cities, where she bought a home in Coon Rapids, MN. She also lived in Blaine and Anoka before moving north to the Osakis area.
Leona belonged to the fellowship known as Communion with People and was very active in supporting her faith. She also was very interested in studying family genealogies and did a lot of research on her family roots. She liked to travel, especially to the Scandinavian countries of her ancestors. She had a keen mind and enjoyed challenging herself with word games such as Scrabble, Cryptoquips and crossword puzzles.
She is survived by her brother, Wallace Hanson of Alexandria and a sister, Irene (Walter) Bjorhus of Sauk Centre, MN; several nieces and nephews. She is preceded in death by her parents, her husband, Henry, a brother, Hilmur Hanson and a sister, Amy Olson.
Funeral services will be held on Saturday, March 24, 2012 at 11:00 am at the Roy-Hetland Funeral Chapel in Osakis with Roy Williams officiating. Organist is Melissa Braund. Interment is at the Highland Memorial Park in New Berlin, Wisconsin and a graveside service is planned there for Monday, March 26 at 11:00 am.

To order memorial trees or send flowers to the family in memory of Leona Gordon, please visit our flower store.