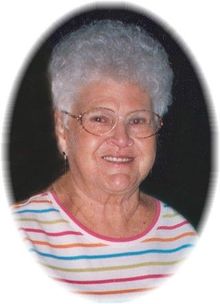 Life History for Lila Blashack
Lila Blashack, age 84 of Osakis passed away on Good Friday evening, April 6 at her son's home in Faribault, MN.
Lila Beatrice Hennagir was born on November 23, 1927 in Madison, WI to Chester and Ruth (Persons) Hennagir. She moved to Minnesota near Bertha, MN as a young girl. One of her first jobs was working at the Woodside Store. On June 16, 1947 Lila was united in marriage to Orville Blashack in Clarissa, MN. They lived in Bertha for several years and then moved to Osakis in 1961.
Lila was a member of the Immaculate Conception church in Osakis and belonged to the St. Elizabeth Mission group. She also was a member of the Osakis V.F.W. Post #7902 Auxiliary.
Besides spending time with her family, Lila enjoyed traveling, bird watching and playing cards, especially Whist. She was a social person who enjoyed being with others. She liked to get together with neighbors and friends for outings and coffee clutches. She was a member of a local Red Hat club and attended various events with her friends.
Lila is survived by her children, Daniel (Edith) Blashack of Faribault, MN and Nanci (Tim Hofmann) Blashack of New Ulm, MN; 7 grandchildren, Matthew, Chad, Adam, Jimmy, Zack, Ruth Ann, Rory Blashack; a great granddaughter, Abbie; a stepgranddaughter, Mellissa; great step-grandchildren, Skyler, Ali and Brie; brothers, Herb (Darlene) Hennagir, Jerry Hennagir of Fergus Falls; sisters, Marge Klimek of Clarissa, Bev (LeRoy) Messer of Bertha, Mary (Max) Klimek of Clarissa; many nieces and nephews.
Preceding her in death are her parents, her husband, Orville in 2003; a son, Steven; 3 brothers, Richard, Marvin and William Hennagir.
Funeral services will be held on Thursday, April 12 at 11:00 am at the Immaculate Conception Catholic Church in Osakis with Fr. David Petron officiating. Music was provided by the funeral choir. Interment was at St. William's Cemetery in Parkers Prairie, MN with honorary pallbearers being Jack & Dorothy Wysoski, Ray Mikkelson, Harold & Wanda Norris, Shirley Quinn and the ladies of the Osakis VFW Auxiliary. Pallbearers are her grandchildren.

To order memorial trees or send flowers to the family in memory of Lila Blashack, please visit our flower store.