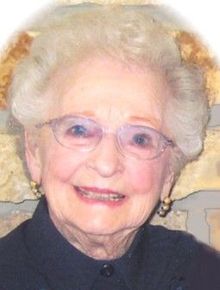 Lillian Kvammen, of Alexandria, formerly of Osakis went to meet her Lord just three days after celebrating her 97th birthday. She was living at Sharon's Place in Alexandria, MN.
On December 4, 1915 at baby daughter was born to Michael and Julia (Halverson) Noehl in Felton, MN. They named her Lillian Catherine. She graduated from Felton High School with the Class of 1933 and went on to further her education at Moorhead State Teachers College. She also took some additional courses at St. Cloud State Teachers College before receiving her elementary education degree. Lil's first teaching position was at the elementary school in Karlstad, MN. She taught there for two years before taking a job at Grove City, MN. In June,1940 Lil was united in marriage to Elwood 'Tut' Kvammen in Osakis, MN. The Kvammen's made their first home in Glenwood, MN and then moved to Minneapolis for two years. While Tut served his country in the military during WWII, Lil moved back to Osakis and was hired as an elementary teacher at Osakis Public School in 1946. She taught there for the rest of her career (teaching primarily sixth grade) and retired in 1978. Even after her retirement, though, Lil continued to help out as a substitute teacher in the elementary classrooms and also for the music program.
Lil was a very active member of the Osakis Lutheran Church. She used her musical talents and served for over fifty years as the church choir director. Besides her beautiful singing voice, Lil could also play piano and organ and helped for a time as the church organist. She also gave of her time to teach Sunday School and was a member of the Ladies Aide, belonging to the Miriam Circle.
Ever since her youth, Lil loved animals and enjoyed being outdoors. She was a true tomboy who wasn't afraid to tackle any task. She loved horses (especially Shetlands) and not only could she ride and drive them, she could even break in new ponies for riding. She was a natural athlete and played college basketball and baseball. Her sports interest continued throughout her life as she remained an avid Twins fan right to the end. She loved to entertain and was an excellent cook and baker. Living near the Lake Osakis for many years allowed her a chance to often get out on the lake fishing. She loved music and even taught piano lessons for ten years. She also kept busy working on embroidery or latch hook projects to gift to family and friends. Lil enjoyed traveling and took many various trips over the years. She was an energetic and loving mother and grandma who will be fondly remembered by her family, friends and a countless number of students.
Lil is survived by her daughters, Karen (Truman) Hanson of Alexandria and Kathryn (Brian) Kvammen-McKinley of Minneapolis; three grandchildren and six great grandchildren.
Preceding her in death are her parents, her husband, an infant son and great grandson, Tanner Hocum; one brother, Vincent Noehl and three sisters, Viola Christiansen, Theresa Bjorstrom and Muriel Balder.
Funeral services were held on Tuesday, December 11, 2012 at 11:00 am at the Osakis Lutheran Church with Rev. Ron Calvert officiating. Brian McKinley was the lector, Tessa Hocum read the Faith Statement and Sandi Benson did the Reflections on Friendship. Musicians were organist, Pat Converse, her beloved church choir and soloists, Terry Williams and Tony Christensen. Honorary pallbearers were Matt & Amanda Hanson, Addison & Noelle Hanson, Lily Gilbertson, Jack Zoller and the Osakis Lutheran Church Choir. Active pallbearers were Shelley and Scott Gilbertson, Jen and Jeff Zoller, Tessa Hocum and Cameron Gilbertson. Interment was at the Lakeside Cemetery in Osakis, MN.
Arrangements are being handled by the Roy-Hetland Funeral Home in Osakis, MN.

To order memorial trees or send flowers to the family in memory of Lillian Kvammen, please visit our flower store.