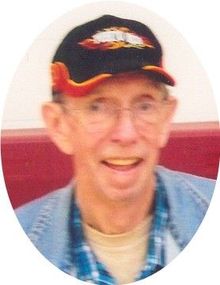 Life History for Loren Reinke
Loren Edward Reinke, age 68, entered the peace of Heaven on Saturday, September 7, 2013 from his home on the farm in Villard, MN.
On May 3, 1945, Loren was born to Alvin and Leona (Dopp) Reinke in Appleton, MN. He grew up on the family dairy farm in near Appleton. He married Carol (Manley) Salyards at the Sacred Heart Church in Murdock on January 18, 1975. They continued to work on a farm owned by John Cairins, in Appleton, until 1981 when they moved to a farm near Eagle Bend. About a year later, they relocated to the dairy farm in Villard, MN, raising hogs and crop farming. Loren also worked for about ten years driving truck for Hensley Trucking of Osakis, after selling the dairy cattle. Loren continued to raise cattle and pigs on the farm, even venturing into horses several years ago with his special friend Pat. Farming was not only a job for Loren but a life that he loved. He enjoyed old tractors and going to tractor pulls. He was a good mechanic and enjoyed working on engines and doing repairs. In 1977, he even participated in the American Ag Movement and drove a tractor from Appleton, MN to the Capital in Washington, D.C. Some of his other hobbies included dancing and listening to music, playing cards, four-wheeling and traveling. He was a doting grandpa to his grandchildren and will be missed dearly for his quick wit by his family and friends.
Loren is survived by his children, Troy Reinke of Villard, Judy Reinke of Osakis, James Reinke of Sauk Centre, Susan (Troy Garding) Pahan of Albany, Keith (Angie) Reinke of Alexandria; 11 grandchildren, Devin Hill, Morrigan Reinke, Toshia, Dalton, Tyus & Milton Reinke, Merissa Marthaler, Kaileigh & Mallory Pahan, Carter & Grace Reinke; a great granddaughter, Aaliyah Marie; a sister, Myra Hirst of Granite Falls, MN and his special friend, Patricia Jensen of Villard (formerly of Garrison, South Dakota). He is preceded in death by his parents, his wife, Carol in 2006, a sister, Lois Zahnow and a brother-in-law, Cliff Zahnow.
Funeral services will be held on Friday, September 13, 2013 at 2:00 pm at the Osakis Lutheran Church in Osakis with Rev. Don Reisig officiating. Readings will be done by his daughter, Judy, with a special hymn sung by his granddaughter, Mallory Pahan. Interment is at the West Evergreen Cemetery in Osakis with honorary bearers being his grandchildren and great granddaughter. Active bearers are Leon Daniels, Sr., Greg Vaughn, Louis Rodriquez, Mike Heiser, Erick Sletto, and Tom Burquest.
No thank you cards will be sent. Memorials are preferred to the Glacial Ridge Home Care & Hospice in Glenwood,MN.

To order memorial trees or send flowers to the family in memory of Loren Reinke, please visit our flower store.