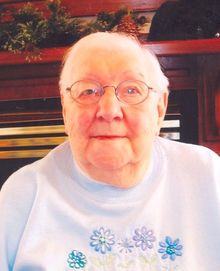 Life History for Loretta Marthaler
Loretta Marthaler, age 95 of Osakis passed away on Saturday evening, April 17, 2010 at her home in the Terrace Heights Apartments in Osakis, MN.
Loretta Catherine Bentfield was born on April 22, 1914 in Ashley Township, Stearns Co, MN. She was one of nine children born to Anton and Anna (Terhaar) Bentfield. Loretta was married on September 30, 1935 at St. Alexius Catholic Church in West Union, MN to Henry Michael Marthaler. They farmed near West Union for many years. In 1975 they retired and moved to Osakis. Loretta was a member of the St. Alexius parish in West Union and was on the Sausage Supper Committee for many years. She also belonged to St. Ann's Christian Mothers, the Daughters of Isabella and the Catholic Aid Association. Upon moving to Osakis, she joined the Immaculate Conception parish.
Loretta loved life in the country. She enjoyed raising chickens and grew a beautiful garden each season. Many of her hours were spent canning and cooking homemade dinners for her family to enjoy. She will be especially remembered for her delicious apple pies and homemade fried potatoes. During the winter months she kept busy quilting, doing latch hook or getting together with friends for a game of cards. She was a loving mother and grandma who will be dearly missed by her family and friends.
Loretta is survived by her daughter, Marguerite Joebken of Milwaukee and her son, Raymond (Lucy) Marthaler of Osakis; 11 grandchildren; 17 great grandchildren and 2 great, great grandchildren; many nieces and nephews.
Preceding her in death are her parents, her husband, Henry who died in 1995;a great, grandson, James Koscinski; a son-in-law, Joe Joebken; 3 brothers, John, Paul and Norbert Bentfield; 5 sisters, Lidwina Gans, Minnie Berg, Millie Bentfield, Sr. M. Frideburga. OSF and Sr. M. Angelus, OSF.
A Mass of Resurrection was held for Loretta on Wednesday, April 21, 2010 at 11:00 am at the Immaculate Conception Catholic Church in Osakis with Fr. David Petron & Fr. Andrew Marthaler officiating. The crossbearer was Gayle Joebken. Musicians were organist, Julie Bottelberghe and the funeral choirs from both St. Alexius and Immaculate Conception parishes. Honorary pallbearers were the members of St. Ann's Christian Mothers. Active bearers were Ryan and Colin Marthaler, Joseph Twomey, Jerome Schubert, Joe and Mike Koscinski. Interment was at St. Alexius Church Cemetery in West Union, MN.
Arrangements were made by the Roy-Hetland Funeral Home in Osakis, MN.

To order memorial trees or send flowers to the family in memory of Loretta Marthaler, please visit our flower store.