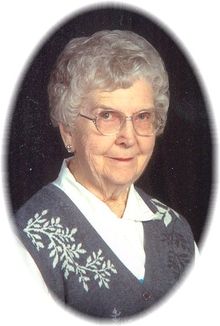 Life History for Lorraine Judson
Lorraine Judson, age 93 of Osakis went to meet Jesus on Friday, July 23, 2010 from the Community Memorial Home in Osakis, MN where she was a resident.
Lorraine Jepson was born to William and Marie (Borg) Jepson on May 14, 1917 in Ogilvie, MN. She graduated from Ogilvie High School and then moved to Minneapolis and found work as a housekeeper. She married Frank Hillmer on January 23, 1940 and they had one son, Ronald. They lived in Osakis and Lorraine worked as a cook for Osakis Public Schools for ten years. After Frank's death in 1975, Lorraine married Jim Kelly in 1978. In 1986, Jim also passed away. Her third marriage was to Delmer Judson in 1987. She was again widowed when he passed away in 2009.
Lorraine was an active member of the Immaculate Conception Church in Osakis and belonged to both the Christain Mothers and the Daughters of Isabella, in addition to the ladies aide. She also volunteered at the Community Memorial Home and attended the Osakis Senior Center. In her younger days, Lorraine enjoyed going to dances. She was an excellent cook, especially when it came to her homemade cookies. Reading, embroidery and crocheting were other hobbies she enjoyed. Her greatest joy however came from spending time with her grandchildren and great grandchildren. Blessed be her memory.
Lorraine is survived by her son and daughter-in-law, Ronald (Arlene) Hillmer of Hastings; granddaughters, Suzanne (David) Kirtz of Apple Valley, MN and Lisa (Mike) Schnegelberger of Cottage Grove, MN; 2 great, grandchildren, Ryan and Kayla Kirtz; a sister, Ivy Nelson of Milaca, MN; 3 nieces and 6 nephews.
Preceding her in death are her parents, husbands and a brother, Vincent Jepson and a sister, Leona McDonald.
A Mass of Resurrection will be held for Lorraine on Friday, July 30, 2010 at 10:30 am at the Immaculate Conception Catholic Church in Osakis with Fr. David Petron officiating. Gathering will begin at 9:30 am. Musicians are the members of the Immaculate Conception funeral choir, with guest soloist, Laurie Youngers. Active pallbearers are Brian McDonald, Dennis Hillmer, David and Ryan Kirtz and Michael Schnegelberger.
Interment is at the Calvary Cemetery in Osakis, MN.
Memorials are preferred to the Hospice of Douglas County, 725 Elm St, Suite 1200, Alexandria, MN 56308.

To order memorial trees or send flowers to the family in memory of Lorraine Judson, please visit our flower store.