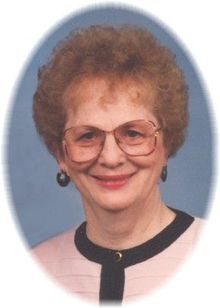 Life History for Lorraine Marthaler
Lorraine Marthaler, age 77 of Osakis, formerly of West Union, died unexpectedly at her West View apartment on Sunday morning, June 19, 2011 .
Lorraine was born on October 18, 1933 in Meire Grove, MN to Herman and Anna (Middendorf) Klaphake. She attended Dist. 54 country school in Stearns County. For several years after high school Lorraine worked at St. Michael's Hospital in Sauk Centre caring for a woman with disabilities. On September 3, 1955 Lorraine was united in marriage to Anthony Marthaler at St. John's Catholic Church in Meire Grove. They dairy farmed for many years near the West Union area until their retirement, when they moved to a small grain farm just northwest of their home place. Anthony passed away in 1999 and then in 2007 Lorraine moved into to Osakis.
Lorraine was a very active member of St. Alexius Catholic Church in West Union. She belonged to the St. Anne's Christian Mothers, the Daughters of Isabella in Osakis (serving as the Regent,) and also chaired the Sausage Suppers at St. Alexius for over 19 years. Lorraine also belonged to the Osakis VFW Auxiliary, the Sauk Centre American Legion and the St. Michael Hospital Auxiliary. In addition, she found a way to volunteered her time helping the Red Cross, the MCCL and as a member of the Community Memorial Home Auxiliary. She also belonged to the rosary group that volunteer regularly at the nursing home. Just for some fun, she also belonged to a local Red Hat club.
Besides the many hours Lorraine spent helping others, she also had many interests and hobbies of her own. She was a wonderful cook who spent hours baking and cooking for her own and her large extended family. She was always in charge of making the homemade dressing and gravy at any family gatherings. She enjoyed going golfing, bowling, playing cards, doing embroidery and needlework and going fishing with family. She was a great sports fan too, who especially liked watching the Twins, Vikings and Timberwolves play. The greatest joy in her life, however was just spending time with her family, grandchildren and great, grandchildren.
She is survived by her children, Greg & Theresa Marthaler of Osakis, Ken Marthaler of Sauk Centre and Debbie White of Shakopee; six grandchildren, Jason (Emily) Marthaler, Jeni (PJ) Wanderscheid, Eric Marthaler, Darian Anderson, Kaden and Alexa White; 2 great grandchildren, Isabella Marthaler and Miah Wanderscheid; siblings, Herman (Kathy) Klaphake, Edward (Marlene) Klaphake, Margaret (Herb) Breitbach of Elrosa, Val (Steve) Kral of Osakis; a brother-in-law, Fr. Andrew Marthaler; her sisters-in-law, Louise Klaphake, Sr. Germana, O.S.B., Sr. Mary Peter, P.C., Joan (Chuck) Pfannestein and Imelda (Jack) McCann; many nieces and nephews and cousins.
She is preceded in death by her parents, her husband, Anthony and a daughter, Jean Anne Marthaler; a brother, Tony Klaphake and a sister, Leona Boeckermann.
A Mass of Resurrection will be held for Lorraine on Wednesday, June 22, 2011 at 10:30 am at St. Alexius Catholic Church in West Union with Fr. James Statz and Fr. Andrew Marthaler officiating. Musicians are organist, Julie Bottelberghe and the St. Alexius church choir. Interment will be in the church cemetery with honorary pallbearers being her godchildren, Tom Boeckermann, Peter Marthaler, Jim Klaphake, Jane Hougnon, Kyle Dirkes, Kristi McCann and Sheli LaCrosse. Active bearers are Jason and Eric Marthaler, Darian Anderson, PJ Wanderscheid, Jim Klaphake and Jerry Imdieke.
Memorials in Lorraine's honor may be directed to Holy Family School of Sauk Centre, MN.

To order memorial trees or send flowers to the family in memory of Lorraine Marthaler, please visit our flower store.