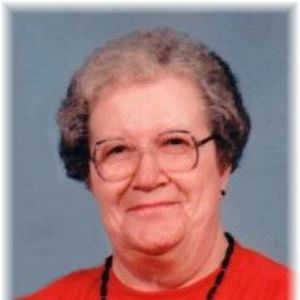 Loyola Amanda Frie, age 95 of Osakis entered her new life on Sunday, Dec. 11, 2016 from the Community Memorial Home in Osakis where she had been a resident since March of 2003.
Loyola was born Oct. 17, 1921 to Anton and Elizabeth (Rademacher) Beste on a farm near Osakis. She attended School District #67 for 8 years. She then stayed at home and worked on the farm with her parents. There she met her husband, Ray and they were married on October 21, 1947 at St. Alexius Church in West Union, MN.
Loyola enjoyed dancing and especially enjoyed going with the neighbors many weekends to the Sauk Centre Coliseum. She loved spending time tending to her flowers and garden. Every year she raised chickens for eating. She loved spending time with her grandchildren and especially enjoyed making mashed potatoes and gravy for them, which they loved. She also had great pride belonging to the neighborhood card club. She tied many quilts in her living room with her sister. Loyola and Ray purchased the farm in 1947 and lived there until their son got married in 1985. At this time they moved across the road. Loyola then became very involved in the Senior Centre in Osakis and enjoyed helping in the kitchen. She continued to live on the farm until 2003, when she moved to West View Assisted Living. In 2005, she entered the nursing home and enjoyed her time there.
Left to mourn her passing are her three children, Diane (Gary) Botzet of Carlos, Ruth (Dennis) Pletcher of Alexandria, Irvin (Deb) Frie of Osakis; 4 grandsons, James (Nicole) Botzet of Carlos, Mark Botzet of St. Paul (St. Paul Seminary), Kenneth (Katie) Frie of Osakis, Todd (Kristina) Frie of Bowman, ND; 7 great grandchildren, Daryn, Evyn, Koltyn and Graci Botzet, Levi and Ella Frie, Olivia Frie; many nieces and nephews.
She is preceded in death by her parents, husband, Ray in 2015; great granddaughter, Kortini Botzet in 2010; 2 brothers, Ralph and Julian and 5 sisters, Mildred, Laura, Hildegard, Merina and Marcella.
A Mass of Resurrection will be held on Saturday, Dec. 17, 2016 at 11:00 am at the St. Alexius Catholic Church in West Union, MN with Fr. Andrew Marthaler officiating. The cross bearer is her godchild, Joan Hennington. Interment is at the church cemetery with honorary bearers being her seven great grandchildren. Active pallbearers are Jim and Mark Botzet, Todd and Kenny Frie, David Marhaler and Newton Earl.
Arrangements by the Roy-Hetland Funeral Home in Osakis, MN.

To order memorial trees or send flowers to the family in memory of Loyola Frie, please visit our flower store.