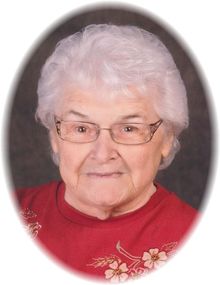 Life History for Lucille Knoll
Lucille Knoll, age 85 of Osakis, formerly of Appleton, MN passed away on July 18, 2012 at the Community Memorial Home in Osakis, MN.
Lucille Marian Pederson was born on January 26, 1927 in Appleton, Mn to Edwin and Susan (Emerson) Pederson. She graduated with the Appleton High School Class of 1945 and enjoyed being a cheerleader. Lucille continued her education and became a registered nurse at Abbott Northwest Medical center. She later moved to New York, doing public health nursing. She was in the Navy Nurse's Corp. during WWII. On January 7, 1950, Lucille was united in marriage to Merlyn Knoll at the Zion Lutheran Church in Appleton. They moved to Balaton, MN and later Janesville, MN. Lucille taught at Emmanuel Hospital in Mankato. After that, the Knolls settled in Olivia, MN and Lucille worked as a nurse for over 25 years at the Renville Co. Hospital in Olivia. She retired in 1986 and moved to Steam Boat Lake in northern Minnesota. In 1999, they relocated to their current home in Osakis, greatly enjoying their place by the lake.
Some of Lucille's hobbies included painting, playing cards (especially cribbage), reading and tending to her plants. She was a devoted fan for all her family's sporting events, which were many since Merlyn was a coach. For a time during retirement, she and Merlyn also owned a craft business and Lucille did all of the paintwork on the projects they created. Lucille enjoyed music and could play both the piano and the organ. Traveling was another enjoyment, and for many years they travelled south to live in Arizona during the winter.
Lucille is survived by her husband of 62 years, Merlyn Knoll of Osakis; children, Mark (Wendy) Knoll of St. Louis Park, Rebecca Amsden of Olivia,David (Lisa) Knoll of Goldsboro, N. Carolina, Daniel (Julie Wegner) Knoll of Alexandria, Kristin (Eric) Douglas of Roseau; 19 grandchildren; 12 great, grandchildren.
Preceding her in death are her parents, her son, James Knoll, two daughters, Katherine and Barbara Knoll; two sisters, Katherine and Carol Pederson.

To order memorial trees or send flowers to the family in memory of Lucille Knoll, please visit our flower store.