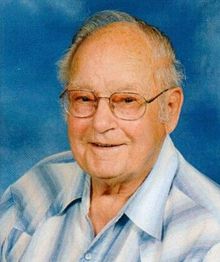 Ken Wittrock, age 88 of Osakis passed away on March 23, 2017 at the Douglas County Hospital in Alexandria, MN.
LuVerne Kenneth Wittrock was born to Herman and Emma (Hoiten) Wittrock in Canistota, South Dakota on January 30, 1929. He graduated from Canistota High School and then attended college for two years before enlisting in the U S Navy in 1950 and served his country as a medic in a MASH unit in Korea during the Korean War. He was honorably discharged in 1954. On October 30, 1952, while on leave, Ken was united to DeElda 'Dee" Heisinger in Humboldt, SD. They lived in California and Rhode Island during his service years and then settled in Sioux Falls, SD after his discharge. Ken worked as a carpenter building homes until a back injury required a new career. He began selling fertilizer and chemicals for an agricultural company and lived in several locations in Minnesota such as Welcome, Bird Island, Lake Park and Paynesville before retiring to Osakis in 1989. He was a member of the Immaculate Conception Church in Osakis and Knights of Columbus, the Osakis VFW and the Osakis Lions Club. He volunteered his time helping at the parish in a variety of ways and also helped at St. Agnes, the local parochial school. Ken loved to travel and did a lot of camping with his family, seeing the country in their motorhome. He was a natural handy-man and could fix about anything that needed it. He enjoyed the outdoors and did a lot of hunting, fishing and snowmobiling throughout his life. He also liked to garden and during the winter months he watched all kinds of sports and Westerns on television. Ken was a country western fan who enjoyed going to 'old-time' dances. Ken was a natural socializer who could strike up a conversation with anyone he met. He was a doting grandpa who enjoyed spending time with his family.
He is survived by his daughters, Mary Jo Wittrock-Beck of Bloomington and Sheila Wendland of Broken Arrow, OK; 5 grandchildren, Jenny Gerster, Sarah (Jonathan) Ammermann, Justin Beck, Tara (Justin) Holman, Josh (Steph) Wittrock; 4 great grandchildren; daughters-in-law, Shari (Scott) Lee of Barrett, MN and Ruth Wittrock of St. Cloud; special friend, Ruth Hinnenkamp of Osakis; several nieces and nephews.
Preceding him in death is his wife, Dee in 2001, two sons, Jeffrey in 2002 and Craig in 2003; a great granddaughter, Kirsten Suckstorff; brother, Lester Wittrock and sister, Norma Benson.
Private family services are being held with inurnment at the Calvary Cemetery in Osakis, MN.
Arrangements by Roy-Hetland Funeral Home, Osakis, MN.

To order memorial trees or send flowers to the family in memory of LuVerne Wittrock, please visit our flower store.